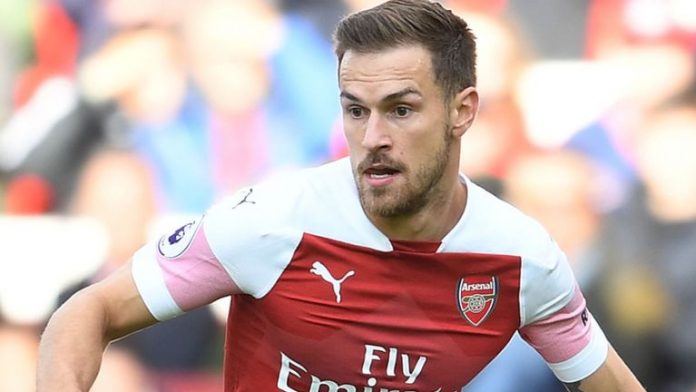 Arsenal midfielder Aaron Ramsey has signed a pre-contract agreement to join Juventus in the summer in a deal that will earn him over £400,000 a week.

The 28-year-old has agreed a four-year contract that will see him join the Italian champions as a free agent, ending his 11-year spell with Arsenal.

Ramsey passed a two-part medical in January, having picked Juve following talks with a host of European clubs.

He will be the highest-earning British player ever based on basic salary.

The Wales international’s Arsenal contract expires on 30 June and the Gunners will receive no fee when he leaves.

In confirming the deal, Juventus said the club would incur costs of 3.7m euros (£3.2m) but did not specify what the fee was for.

Arsenal said Ramsey had made a “fantastic contribution” during his time at the club and will “have a special place in the hearts and memories” of fans.

On his Instagram page, Ramsey thanked Arsenal’s fans and said he will “continue to give the team 100%”.

He wrote: “You welcomed me as a teenager and have been there through all the highs and lows I’ve encountered during my time at the club.

“It is with a heavy heart that I leave after 11 incredible years. Thank you.”

The Juventus website welcomed Ramsey by stating he will become the third Welshman to represent the club, following the John Charles and Ian Rush.

Ramsey, who joined Arsenal from Cardiff City in 2008 for a fee of about £4.8m, held preliminary talks with Barcelona and also received an offer from Paris St-Germain.

Bayern Munich, Inter Milan and Real Madrid also showed interest, with Real forward Gareth Bale understood to have encouraged his Wales team-mate to link up with him in Spain.

Arsenal did present Ramsey with the offer of a new deal in September but it was turned down and the club were not prepared to meet his salary demands.

Head coach Unai Emery had reservations about Ramsey’s role in his squad.

Ramsey’s desire to play as a number eight, running on to the ball from an advanced central midfield position, clashed with Emery’s vision.

Emery does not usually deploy a number eight, meaning the Welshman has mainly been used in a strict deeper role without license to roam or in the number 10 position with his back to goal.

In his 11 seasons at the club, he has struck double figures in a season three times, with a best mark of 16 in all competitions in 2013-14.

I’m not sure Aaron Ramsey could turn down a deal like this with the clubs that were interested. He’s just another player who got into the situation where he could run the contract down.

I think Arsene Wenger said not so long ago this is going to be regular occurrence. Players are getting paid so much they can afford to run down a contract.

At his age, he’s worth at least £30-40m. Juventus are saving so much money even with what they are paying him. It is a move that makes sense to everybody other than the club he is leaving.

Arsenal have let the situation get out of hand by letting players run their contracts down. In my day, once you got to two years left on your contract, if you were valued by the club you would be signed on again. Arsenal have made a rod for their own back in that sense.

The World’s Most Valuable Soccer Teams: Barcelona edges Real Madrid to land at No.1 for first time

Akrobeto is TRENDING in Germany as Bayer Leverkusen reacts to the actor’s mispronunciation of...