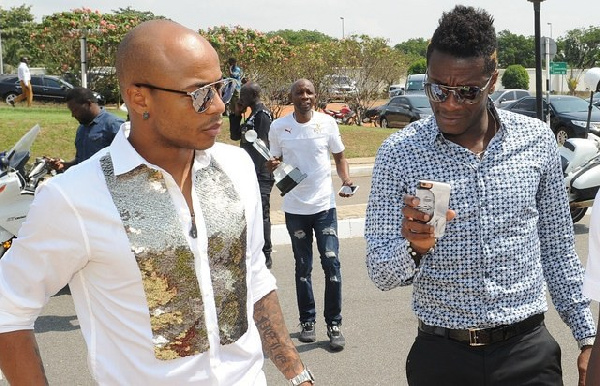 Asamoah Gyan has pledged his full support for Andre Ayew as the substantive captain of Ghana while congratulating the midfielder over his new leadership role.

This comes after Ghana coach Kwasi Appiah named Ayew as the new captain while the nation’s football federation said former captain Asamoah Gyan had been made ‘General Captain’ for the 2019 Africa Cup of Nations squad.

Gyan said Monday he would quit the national team, angered by Appiah’s plan to strip him of the team captaincy, but the country’s President Nana Akufo-Addo intervened and persuaded the veteran to stay on.

There were fears that this would lead to a clash between the two players but Gyan has now hailed Ayew on his appointment insisting on his unflinching support for the new skipper.

“What I can promise Ghanaians is that, Former Captain Asamoah Gyan is very happy and all he wants to say is that, he congratulates André Dede Ayew and Kwadwo Asamoah for taking this position and we are with them,” Gyan’s spokesman Kweku Obeng Maestro told GBC’s Radio program ‘Behind the News’.

“In fact they have been with us all these years when we were captaining the national team.

“We are pledging our massive support especially in this particular campaign and the objective is that we need to bring the trophy here and that is what we opt for”, he assured

Asamoah Gyan had been captain of the national team since 2012, leading the Black Stars to four major international tournaments including the World Cup.

Ayew, a son of Ghana football legend, Abedi ‘Pele’ Ayew, made his debut appearance in the Black Stars as a teenager in 2008.

See also  Jean-Pierre Adams: The French footballer who has been in a coma for the last 37 years

He captained Ghana’s junior side to win the Under-20 World Cup in 2009.

The 29-year-old is replacing Black Stars all-time leading top scorer Asamoah Gyan, who recently had a row with Appiah over the captaincy position.

Italy-based midfielder Kwadwo Asamoah has been named the deputy captain.

A 29-man provisional squad will leave Accra for Dubai on June 1 for pre-tournament preparations, after which a final 23 will be named for the tournament, which kicks off on June 21.

The Black Stars are in Group F with defending champions Cameroon, Benin and Guinea-Bissau.