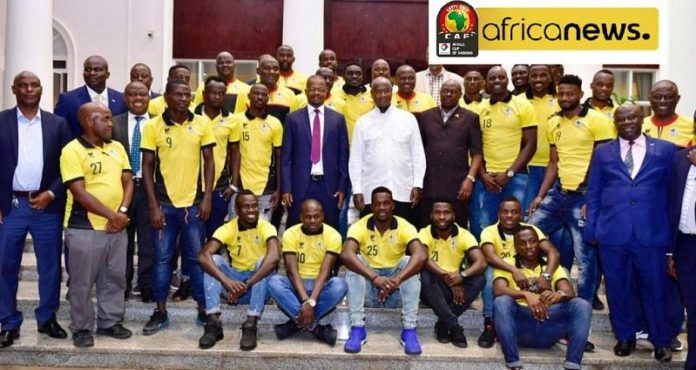 Among others, president Museveni has promised a million dollar prize to be shared among the team – call it end of service benefit.

Football is both a rallying point and a distraction for different people across Africa. But for many, it perhaps is more the former than the latter.

The fervor allows reprieve of sorts for the political crisis in Burundi, the widely reported human rights crackdown in Egypt and even the security crisis bedeviling Mali.

It is more so because even in countries whose teams are not in Egypt, people are gripped with the fever. On a purely satirical level, we look to draw parallels with political events – past, present – with incidents on the Egyptian fields.

Despite being one of the teams that protested over unpaid bonuses, the Ugandan team that crashed out of the AFCON at the round-of-16 stage have received presidential commendation back home.

Among others, president Museveni has promised a million dollar prize to be shared among the team – call it end of service benefit.

The president in his commentary also spoke particularly about the goal that ended the Ugandan journey. “I don’t know how Senegal got that goal,” he said in reference to the Mane strike in the round of 16 clash.

“I see our players are all fit young people. All they need is more stamina. I thank the team once again,” Museveni stressed.

Africa, where Squirrels beat Lions across the Sahara

The AFCON has a number of animals and elements of the solar system participating – thanks to the aliases of the different national teams.

Lions have roared (Senegal, Morocco) in the groups, stars have shined (Ghana) and failed to shine (Tanzania and Kenya). The Desert Foxes (Tunisia) have prevailed whiled the Djurtus (Guinea Bissau) crashed out.

Benin’s Squirrels sprung the biggest shock of the AFCON after dismissing pre-tournament favourites, the Atlas Lions of Morocco.

The Squirrels started off by taking a bite of the Lions who roared back only for a prolonged duration of their exchanges across the Sahara. In the end, the Squirrels proved more potent scarring the Lions and leaving them with a raw sore – they’d failed to roar.

East and southern Africa were the biggest losers after the first 12 days of action in Egypt. The two blocs had three teams sent packing from the competition for failure to justify their inclusion – very much like not paying their dues.

CAF must have written to them and asked them to pack out of the plush hotels, “we cannot continue to spend on teams that cannot even manage a respectable third position, please be gone,” the letter may have said – you never know.

So East Africa went with four slots and three are headed back – to Dar es Salaam, Gitega and Nairobi. For accountability purposes, there must be a probe as to how the east failed and by so doing put all its eggs in the Ugandan basket – maybe because only Cranes lay eggs.

East African Community, EAC, is currently led by Rwanda’s Paul Kagame and so the jury – our jury – calls on Kigali to summon all the “ousted” coaches to explain the triple loss – by Burundi, and the coordinated losses by Tanzania and Kenya on Match Days 1 and 3.

And oh, lest we forget, Kenya must explain why they allowed Tanzanians to celebrate twice leading in the Swahili derby and then coming back to beat them twice – on the field and social media.

We don’t expect much from the probe but it would lessen the Tanzanian anger for Kenya beating them and soaking so many goals themselves that they failed to even earn a qualifying third place slot.

Attention to the Cranes who are the sole East African passport holders covering up for the dull stars of Harambee and Taifa not to forget the Gitega warriors who were beaten inside out on their maiden outing. Viva The Cranes of Uganda.

We are back on other issues of satirical importance, see you on the other side.