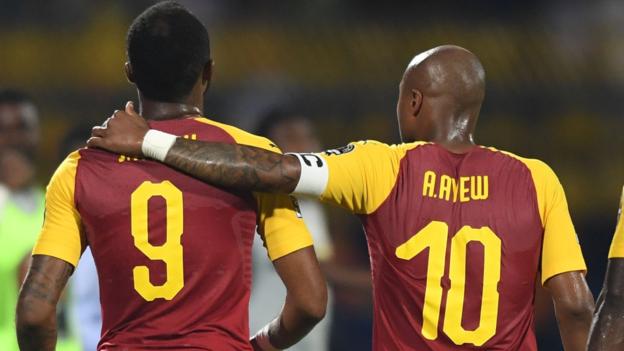 Andre and Jordan Ayew were both on target as 10-man Ghana were forced to settle for a draw against Benin at the Africa Cup of Nations.

His younger brother Jordan fired Ghana ahead, but Pote earned the Squirrels a point after John Boye was dismissed for a second yellow card.

Cameroon defeated Guinea-Bissau 2-0 in Group F’s other game on Tuesday.

Ghana arrived in Egypt as one of the favourites for the title but were carved open for Benin’s opener, which came from the first real attack of the contest.

The Black Stars’ response was almost immediate, though, the elder Ayew brother finding the bottom corner with a deflected drive from the edge of the penalty box.

Jordan Ayew, who spent the 2018-19 season on loan at Crystal Palace from Swansea City, capitalised on a lapse in concentration from Olivier Verdun to put Ghana ahead, before Boye – who had been booked in the first half – was shown a second yellow card for time-wasting.

Benin soon made their numerical advantage count, Pote firing home his second of the game following a well-worked corner to earn the Squirrels their second ever point in the tournament.

The Ayew brothers have been Ghana’s twin talismen for three Afcons now, but Benin gave them a chastening reminder that they can’t do everything themselves.

Benin’s shock early goal was a result of nothing less than Ghana throwing down a red cloak and inviting them to put the ball into their goal.

Then the Ayew brothers set to work, hauling Ghana into the winning position they were expecting – only for a lack of discipline to cost them, as Boye was sent off before another defensive lapse let Pote get his second.

Benin were constantly at Ghana and really could have won it at the death. Holders Cameroon might well walk away with this group, but the fight for second place is now set up very nicely indeed.