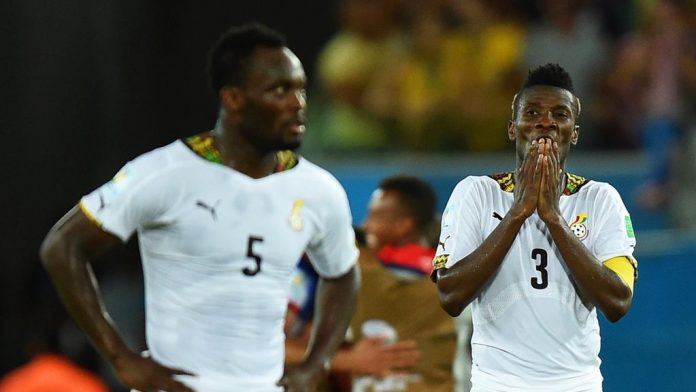 According to Tuko.co.ke, a Kenyan news and entertainment website, Black Stars skipper, Asamoah Gyan has been rated the sixth worthiest footballer on the continent .

The 33-year-old is said to be worth about $23million being the money he acquired while playing for clubs such as Udinese, Rennes, Sunderland, Al Ain and Shanghai SIPG.

Gyan, who currently plies his trade in the Turkish league with Kayserispor is also said to have several business interests including the yet-to-be-operational Baby Jet airline.

Essien, 36, who has been capped 58 times for the Black Stars with nine goals is said to be worth about $35 million which he earned from his playing career.

The former, Bastia and Lyon ace who also featured for clubs such as Real Madrid and AC Milan is currently a free agent having been released by Indonesia side, Persib Bandung in 2018.

Cameroun legend, Samuel Eto’o sits on the summit of the list with a net worth estimated to be around $95million.

The 37-year-old who is considered as one of the most successful players on the continent for winning the continent’s most prestigious footballer award four times became the highest earning footballer while playing for Russian side, Anzhi Makhachkala raking an annual salary of $2.5m.

He is followed by Cote d’Ivoire legend, Didier Drogba whose net worth was not made available but was said to have raked in substantial amount with his wage of $150,000 a week at Chelsea where he spent eight seasons.

Later he went to Chinese side, Shanghai Shenhua where his weekly salary was $200,000, he later move to Galatasaray in Turkey before returning to Chelsea then to the MLS in USA where he is said to own shares in Phoenix Rising Football club

Yaya Toure who left Manchester City last season is said to be the third richest player on the continent with an estimated net worth of about $70million.

The 35-year old was said to have made his millions from the English club where he spent most of his playing career after his transfer from Barcelona.

Togolese international, Emmanuel Adebayor is regarded as the fourth richest Africa footballer with estimated net value of about $45million.

UCL: Hakim Ziyech off the mark in emphatic Chelsea win against Krasnodar