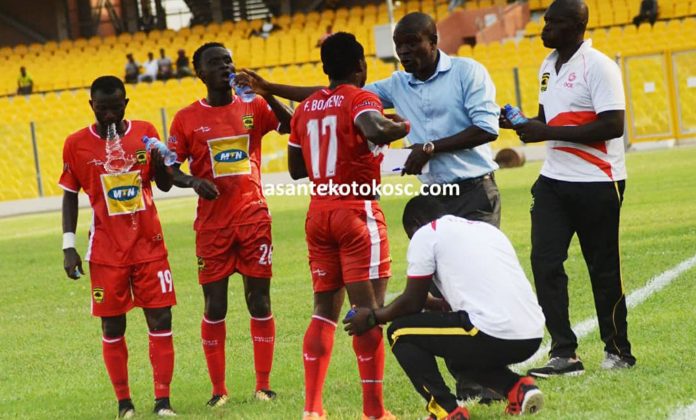 Kumasi Asante Kotoko qualified for the CAF Confederation Cup group phase for the first time in 11 years after dispatching Coton Sport Garoua 2-1 in the second leg play-off match at the Baba Yara Stadium in Kumasi on Sunday to progress 5-3 on aggregate.

Skipper Amos Frimpong’s penalty conversion on the stroke of half time and Maxwell Baako’s masterpiece of a strike in the 53rd minute ensured an important win that renewed a long-standing bond between the players and fans who filled the stadium to the rafters and made Coach Charles Kwablan Akonnor an instant hero.

Coach Akonnor became the first man to qualify the team to this stage since 2008.

Kotoko pushed to consolidate their qualification barely under one minute of kick-off when midfield gem, Maxwell Baako, initiated what could have been the opener from the left flank but Emmanuel Gyamfi’s shot was saved by goalkeeper Bassa Djeri.

The move galvanized the entire Kotoko team, cheered on by a packed stadium never witnessed in recent times.

In spite of the desire to make history with the team, Akonnor was not naive about the Camerounian threat, blending a perfect mix of an attacking and defending players.
Playing with a packed five midfielders, the Kotoko team always massed up in attack to join lead striker, Songne Yacouba, to cause havoc.

Kotoko took total charge of the game by the 10th minute forcing the visitors to be on the back foot, and only attacked sparingly with their long balls.

But by the 20th minute Coton Sport confidence had soared bursting out from their defensive shelves and harassed Kotoko intermittently but lacked the needed bite upfront.

Kotoko recovered briefly after a temporary hold up following Amos Frimpong’s aerial injury and benefited from a penalty awarded by Cape Verde referee, Fabricio Duarte, after Yacouba had been brought down in the box.

Frimpong popped up to put the ball in the far right corner beating goalkeeper Bassa.

The electrified atmosphere spurred on Kotoko as Baako delivered a deceptive masterpiece to fetch the Ghanaians’ second goal in the 53rd minute.

That was preceded by a pile driver a minute earlier from Gyamfi from a swift move from the right flank, stretching goalkeeper Bassa to his elastic limit.

The stadium was turned into a carnival session with students of the Continental Hall of the Kwame Nkrumah University of Science and Technology (KNUST) leading the charge with a non-stop singing, otherwise known as ‘jamma.’

The Kotoko players responded with the introduction of the famous “agoro” system, placating the fans with a scintillating and unblemished display of football prowess.

In spite of the dominance, Kotoko never went to sleep, they pushed for more goals as Gyamfi, Yacouba all came close to increasing the tally, only to be denied by the agile goalkeeper Bassa.

Oumarou Sali consoled the Camerounians with an 86th goal but it was an effort that was too little too late.

WAFU U-17: Ghana packing out of Lome after 3-1 loss to Cote d’Ivoire