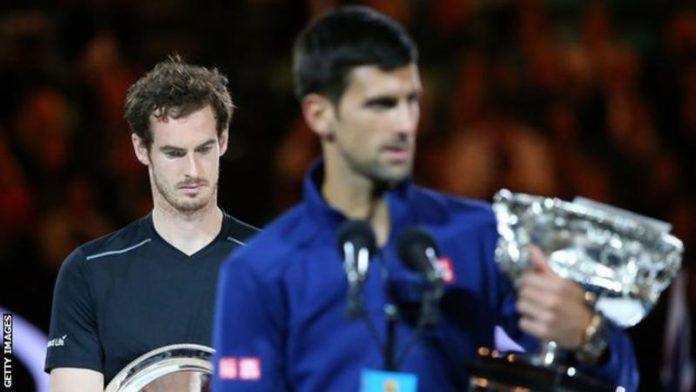 Former world number one Andy Murray will aim to reignite his career after an injury-hit 2018 when he returns to the Australian Open next week.

The 31-year-old Briton missed last year’s tournament – where he is a five-time runner-up – after hip surgery.

Murray is ranked 230th in the world after playing just six tournaments in 2018, but used his protected ranking to enter the first Grand Slam of the year.

Kyle Edmund – Murray’s replacement as British number one and ranked 14th in the world – is looking to match his maiden run to last year’s semi-finals in Melbourne, but his preparations have been disrupted by a knee injury that forced him to withdraw from this week’s Sydney International.

Britain’s leading female player Johanna Konta – a semi-finalist in 2016 – is hoping to start the new season positively after a disappointing 2018 but she, like Edmund, is seeking to shake off an injury, having pulled out of the Sydney event with a neck issue.

Compatriots Heather Watson, Katie Boulter and Cameron Norrie have also qualified for the main singles draws, while Dan Evans, Katie Swan and Harriet Dart are among seven Britons trying to join them by coming through qualifying, which starts on Tuesday.

Although Murray is able to use a protected ranking to enter, he will not be seeded – meaning he could face any of the world’s top players when the draw is made on Thursday.

There have been eight different female Grand Slam singles champions in the past two seasons, illustrating how unpredictable the women’s game is.

One name is leading the Australian Open odds, however: Serena Williams.

The 37-year-old American, who says she almost died giving birth to daughter Olympia in September 2017, returned to action last year and reached back-to-back finals at Wimbledon and the US Open.

Now she is the favourite to win what would be a 24th Grand Slam singles title – which would equal Margaret Court’s all-time record, aptly at the Australian’s home tournament.

This is the first Grand Slam since Williams lost to Naomi Osaka in the final of the US Open in September – a match that was overshadowed by the American’s outbursts that included calling the umpire a “liar” and “thief”.

Will Nadal be fit enough to play?

Spanish great Rafael Nadal hopes to be fit enough to play, despite pulling out of the Brisbane International last week with a thigh strain.

The world number two, who won the 2009 Australian Open title, said he had wanted to play at the warm-up event but was advised not to by doctors after an MRI scan.

He did, however, play an exhibition event on Tuesday – a Fast4 format – and said afterwards he did not “feel pain”.

“Of course it would be better if I had the chance to play a full tournament but the big importance is I am feeling good with the ball,” the 32-year-old added.

“The only thing is that I didn’t play matches since a long time ago.”

Novak Djokovic: The 31-year-old Serb is the man to beat after rediscovering his best form over the past year. Outside the world’s top 20 in early June, he recaptured his form to stunning effect – losing just once in 32 matches on his way to capturing the Wimbledon and US Open titles.

A third successive Slam – giving him a seventh Australian Open title – would put him alone, ahead of Australian great Roy Emerson and long-time rival Roger Federer, in terms of most men’s singles titles in Melbourne.

Roger Federer: The Swiss maestro may be 37, but he is the reigning champion in Melbourne.

Like Djokovic, he has won six Australian Open titles, and the 20-time Grand Slam champion is one victory away from his 100th career singles title.

Alexander Zverev: Will this be the year when the old guard is finally toppled? It is a question which continues to be asked and the answer has, so far, continued to be ‘no’.

Germany’s Zverev, 21, proved he is the candidate most likely to lead the challenge with his victory over Novak Djokovic at the ATP Finals in London in November. Now the fourth seed must show he can challenge over the five-set format.

Apart from Williams, who are the key women’s contenders?

Simona Halep: The 27-year-old Romanian will be the number one seed for the fifth Grand Slam in a row, aiming to go one better than last year when she lost to Caroline Wozniacki in the final.

Having finally claimed her first Grand Slam title at the French Open in June, Halep is unburdened by the pressure of never having won a major and says being the woman to beat gives her added focus.

Caroline Wozniacki: Like Halep, the Dane shook off the unwanted tag of being a world number one who had never won a Slam with her Melbourne victory last year.

The 28-year-old will be seeded third in her first major since revealing she has been diagnosed with rheumatoid arthritis.

Angelique Kerber: A two-time winner in Melbourne, the Wimbledon champion is another leading contender.

The 30-year-old German finished the 2018 season strongly and, with the experience of winning the biggest prizes, is among the favourites.

Naomi Osaka: The 21-year-old Japanese player became a global star with her victory at the US Open – despite her achievement being somewhat overshadowed by Williams’ row with umpire Carlos Ramos.

Now the fourth seed is expected to continue challenging for the biggest prizes.

Who is not there?

World number five Juan Martin del Potro is the biggest name missing as he recovers from a fractured kneecap.

The 30-year-old Argentine, who lost to Novak Djokovic in September’s US Open final, sustained the injury in a heavy fall at the Shanghai Masters in October.

What about the doubles?

There are three Britons seeded in the men’s doubles, including Jamie Murray, who won the title here in 2016 alongside Brazilian partner Bruno Soares.

The pair are the third seeds and will be seeking a third Grand Slam title together. Britain’s Dom Inglot partners Croatia’s Franko Skugor, while Joe Salisbury plays alongside American Rajeev Ram.

Tie-breaks will be played in the final set at the Australian Open for the first time.

If the match reaches 6-6 in the final set, the winner will be the first player to reach 10 points.

Men’s singles players will be permitted 10-minute breaks after the third set if temperatures reach hazardous levels in Melbourne. The rule is already in place for female players to have a heat break between the second and third sets.

Organisers have unveiled a “more extensive” Extreme Heat Policy after temperatures in the shade approached 40C during last year’s tournament.

EUROPA LEAGUE FINAL: Chelsea v Arsenal, All you need to know about the game...