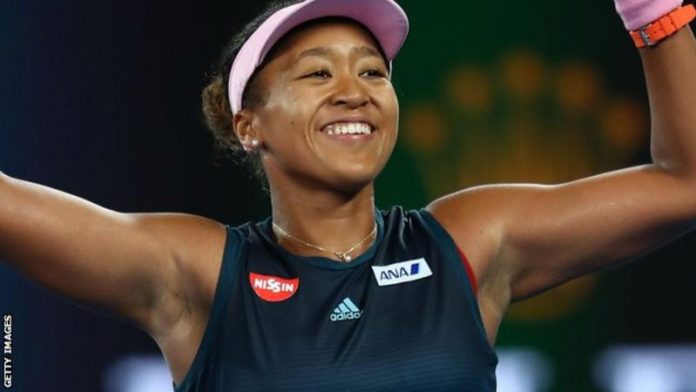 The Japanese fourth seed won 6-2 4-6 6-4 and will face Petra Kvitova, another Czech, in Saturday’s showpiece.

The semi-final was played under the Rod Laver Arena roof as temperatures touched 40C in Melbourne.

Osaka hit another forehand winner to give herself a match point at 40-30, shouting “come on” as she looked up to the sky and tried to compose herself, then hit what she thought was an 111mph ace down the middle.

After it was called out, Osaka challenged and clasped her hands together in hope as she watched the replay – and was left celebrating when Hawkeye showed the ball had clipped the line.

Asked about her feelings when Pliskova won the second set, Osaka said: “I kind of expected it a little because I’ve played her so many times and she has beaten me more than I’ve beaten her. I told myself to regroup and I managed to win.

“It’s just experience playing matches like this. I was so scared serving second serves, I was like ‘oh, my god, please’ and somehow I made it so I guess that’s experience.”

The final will see Osaka and 28-year-old Kvitova, who has reached her first Grand Slam final since being stabbed in December 2016, battling for the world number one ranking.

Osaka won her maiden major at the US Open in September, although that victory was overshadowed by opponent Serena Williams’s furious row with umpire Carlos Ramos.

Now the fourth seed has the chance to savour another triumph in the first Grand Slam of the 2019 season.

Osaka has become the first player to reach the final at her next Slam following a maiden major win since American Jennifer Capriati in 2001.

She produced a bold performance from the start against the big-hitting Pliskova, hitting 16 winners and breaking serve twice on her way to clinching the opening set in 32 minutes.

The early advantage boded well for the Japanese player, having won her past 58 matches after taking the first set.

Yet Pliskova, who fought back from four match points down to beat Serena Williams little over 24 hours earlier, played more aggressively in the second set and was rewarded with a decisive break in the 10th game.

Osaka only landed one first serve and made two unforced errors as she relinquished her serve to love.

Pliskova had finally found her rhythm, and then threatened to break Osaka in the opening game of the decider.

Osaka crucially dug in to save three break points, before breaking to love in the following game and then fighting off another break point at 4-3 with an ace.

That left her another hold away from becoming the first Japanese woman to reach the Australian Open final and she upped the ante again from 30-30 to seal her place in another Grand Slam showpiece.

The match between Pliskova and Osaka was the best women’s match I’ve ever seen.

That was incredible in terms of level – 58 winners for Osaka and only 20 unforced errors. I was impressed by Pliskova’s resilience – she should have lost in two sets. She kept on finding solutions.

Now it’s two players playing at their peak facing each other in the final – Petra Kvitova and Naomi Osaka.

If I have to pick a favourite for the final then I will go for Osaka.