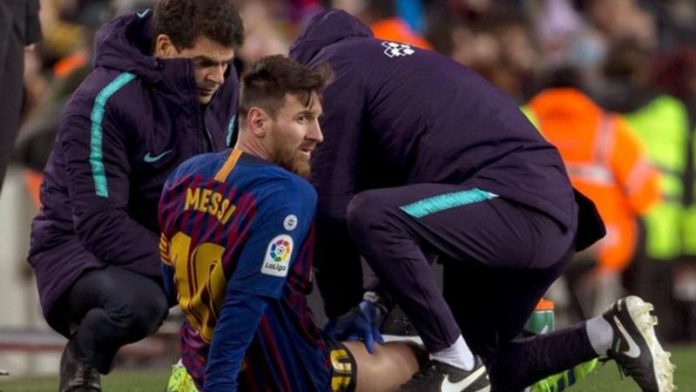 Barcelona have named Lionel Messi in the squad to face Real Madrid in Wednesday’s Copa del Rey semi-final first leg, but will “wait until the last moment” to decide if he plays.

The Argentine returned to training on Tuesday after suffering a thigh injury in Saturday’s 2-2 draw with Valencia.

“It is true that sometimes we have had doubts with players and we have waited until the last moment,” said manager Ernesto Valverde.

“It’s the same with Messi.”

Wednesday’s tie at the Nou Camp will be the first of three El Clasico’s in 25 days, with the second leg on Wednesday, 27 February and a La Liga encounter on Saturday, 2 March.

Forward Ousmane Dembele is also unlikely to be fit for the first leg at the Nou Camp, as he is still recovering from a hamstring injury.

Real Madrid have everyone available apart from defender Jesus Vallejo, who is out with a muscular issue.

No Messi, no problem

Messi’s pedigree is undeniable and he is the all-time leading scorer in this fixture with 25 goals.

However, the 31-year-old missed the last meeting between the two sides in October with a broken arm, as Luis Suarez’s hat-trick saw Barca cruise to a 5-1 win.

Barcelona also have a higher average number of goals without him against their fierce rivals, than when he is on the pitch, albeit he has only been absent from three games.

Barcelona are about to embark on a gruelling run of fixtures with league games at Athletic Bilbao, Sevilla and then Real in the next four weeks, as well as two Champions League ties against Lyon thrown in the mix.

Nonetheless, a fit and available Messi is clearly preferable for the La Liga leaders who are giving their captain the time he needs to to prove his fitness.

Messi missed training on Monday, but during a 15-minute open session the following day, a smiling Messi was seen doing some light jogging and taking part in a relaxed keep-ball session.

Is the tide changing at the Bernabeu?

Madrid were in disarray after the last meeting between these two Spanish giants as Barca moved back to the top of the table, seven points clear of ninth placed Madrid.

Julen Lopetegui lost his job the following day with the Champions League holders owing his sacking to a “great disproportion between the quality of the staff of Real Madrid and results”.

However, Los Blancos have moved up to third in the table – eight points behind Barcelona – having won their past four league games, and they are just two matches from a cup final.

Whether it’s a sign of defiance or just tempting fate, manager Santiago Solari says he hopes Messi is fit for the first leg.

“It’s always good when the best players get to play every game, but whether or not he plays will not influence the way we prepare for the game at all,” said Solari.

With only Vallejo unavailable for the visitors, Solari said: “It’s harder to pick a team when everyone is available, but the important thing is that every player puts their talent, ability and effort at the service of the team.”

Barcelona have a tight grip on this competition having won the past four finals to take their overall number of Copa del Rey triumphs to 30 – more than anyone else.

Real are the third most successful club, having won the trophy 19 times, although they last claimed the title in 2014.

2018-19 continues this trend, with one of the two Spanish giants guaranteed a spot in the final for the ninth year running.

Jordan Ayew named ManBetX Player of the Month for August