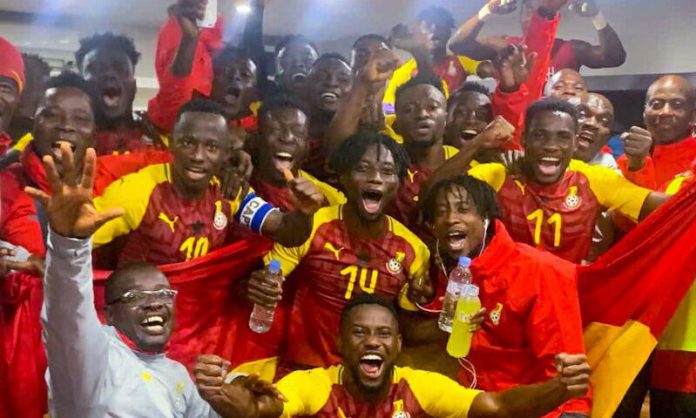 The Black Meteors of Ghana have arrived home from Algeria after beating their counterparts 2-1 over two-legs to seal qualification to the U-23 Africa Cup of Nations to be hosted by Egypt later this year.

The Meteors went into the second leg which was played on Tuesday as huge underdogs after only managing a 1-1 draw in the first leg played at the Accra Sports stadium last Friday.

A combination of poor preparations, injuries and a bad first leg result meant no one gave the Black Meteors a chance to beat Algeria in their own backyard and qualify for the U-23 AFCON.

But Coach Ibrahim Tanko and his charges defied the odds and ended up beating their host Algeria 1-0 thanks to captain Yaw Yeboah’s superb solo goal in the 70th minute.

The victory means Ghana will participate in this year’s U-23 AFCON, where the teams who finish first, second and third, get to represent Africa at the 2020 Tokyo Olympics.

Speaking on the team’s arrival on Thursday, September 12, 2019, coach Ibrahim Tanko said he was grateful to the few supporters who kept faith with the team despite the poor first-leg result.
“ You the supporters are the best and the reason we won. Almost 80 percent of Ghanaians wrote us off ahead of the game, but you didn’t and the way you have come to the airport to welcome us back home is appreciated. Now the main aim for the technical team is to ensure that we qualify for the 2020 Olympic Games.”

The Black Meteors of Ghana has not qualified for the Olympics Games for the last 15 years. The last time was in 2004 in Athens, Greece.