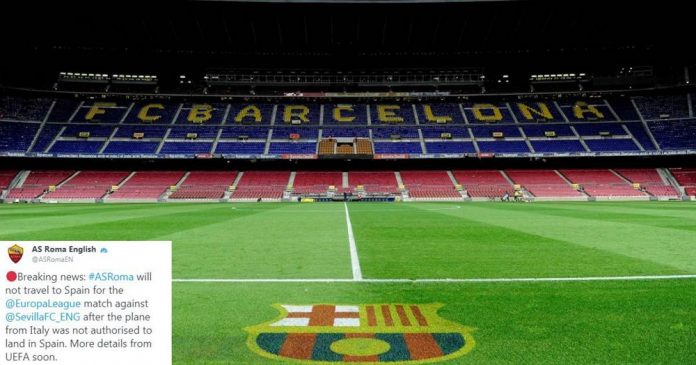 The upcoming Champions League and Europa League ties between Spanish and Italian teams could not be played after all. AS Roma have just announced that they haven’t been allowed to land in Seville as they were supposed to play Sevilla in the Europa League Round of 16 this Thursday, March 12.

Roma explain that they haven’t received permission from the Spain authorities for their plane to land in the country. This would put the next week’s Champions League clash between Barcelona and Napoli at risk.

On Tuesday, it was confirmed that the game will take place behind the closed doors on March 18. However, Spain have officially forbidden any flights to Italy which would complicate Napoli’s journey to the Catalan capital.

Previously, Barcelona’s officials have supported the decision to play the game without fans allowed. The players haven’t asked to postpone the match, the club’s spokesperson Josep Vives has recently stated.

Meanwhile, Getafe‘s president told Onda Cero on Tuesday night that his side wouldn’t travel to Milan this Wednesday to play Inter in the Europa League round of 16.