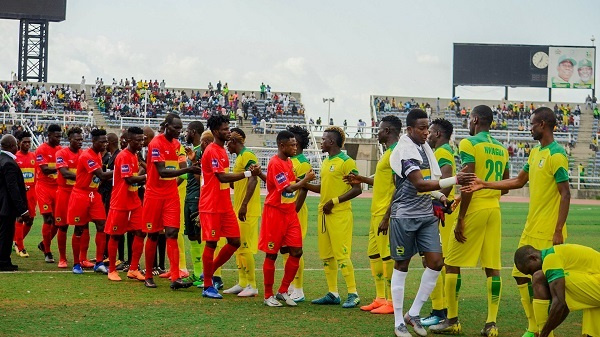 Enyimba overturned a 1-0 first-leg defeat at the hands of Rahimo to win 5-0 in the second-leg of their Caf Champions League preliminary round encounter at Enyimba International Stadium on Sunday.

The Aba-based club took advantage of Iossuf Zanon’s dismissal in the 10th minute to thrash the visitors as they progress to next stage 5-1 on aggregate.

Ruben Bala and Sopuruchi Augustine Dimgba scored two apiece, while Stanley Okorom also got on the score sheet for the People’s Elephant

In Kenya, a Nicholas Kipkirui brace, strikes from Dickson Ambundo and Boniface Omondi as well as an own goal helped Gor Mahia to a 5-1 win over Aigle Noir. Benjamin Gasongo netted a consolation for the visitors, but it didn’t change the course of the tie given the first-leg a fortnight ago ended goalless.

Kano Pillars were knocked out of the continental club competition following a 2-0 defeat by Asante Kotoko.

The Ghanaian outfit went in front in the 12th minute through Kelvin Andoh, and it stayed that way till the 81st minute when Emmanuel Gyamfi scored the hosts’ second of the game.

The Porcupines progress to the next round at Pillars’ expense after overturning a 3-2 defeat in Kano.

In Mauritius, Fosa Juniors progressed to the next round after a 1-1 draw with Pamplemousses SC saw them qualify 2-1 on aggregate, as it ended 1-0 to the side from Madagascar in the first leg.

Jean Fabrini Razah opened the scoring for the hosts in the 12th minute, but Santatra Andriamamonjy pegged them back just after the hour mark to carry the visitors through.

Mekelle 70 Enderta and Cano Sport Academy played out to a 1-1 draw in their encounter on Sunday afternoon.

Amanuel Gebremichael put the hosts in front in the 13th minute, but Benjamin Naone levelled in the 39th minute. It stayed that way, and the Malabo-based club progress 3-2 on aggregate, after winning the first-leg 2-1.

In Tanzania, Simba SC and Uniao Desportiva Do Songo had everything to play for following their 0-0 draw two weeks ago.

It ended 1-1 after 90 minutes, after goals from Luis Misquissone for Unaio and a late leveller by Erasto Nyoni for Simba, saw the visitors progress on away goals.

Elsewhere, two second-half goals for Elect-Sport FC saw them defeat Cercle Mberi Sportif 2-0 on the day, and also on aggregate because the reverse fixture ended goalless.

An Isaac Mensah effort in the 37th minute helped Atletico Petroleos de Luanda to a 1-0 win over Matlama at Estadio 11 de Novembro.

Given the Angolan club won 2-0 in Lesotho, they progress to the next round 3-0 on aggregate.

In Togo, a late Richard Nane goal for ASC Kara saw the Togolese side win Buffles du Borgou 1-0. It ended 1-1 a fortnight ago, so the 2-1 aggregate score means Kara go through.

Horoya progressed to the next round 2-1 on aggregate at Stade Malien’s expense following a 1-0 win in Guinea.

Dramane Nikiema netted the only goal of the game in the 24th minute to take the pre-match favourites through.

Following a scoreless draw between Vita Club and UMS de Loum in the first-leg, there was a lot riding on their rematch in Congo.

It took a Zakaria Mumuni goal on the hour mark to seal a 1-0 win for Vita Club, who progress to the next round.

Just like the aforementioned encounter, the first-leg between Nouadhibou and Societe Omnisports de l’Armee ended goalless, leaving both sides with everything to play for in the return match.

An Abdoulaye Gueye penalty in the 70th minute was enough for the hosts to claim the win, thereby progressing by a slender aggregate victory.

Al Nasr and USM Alger picked up 3-1 victories on home soil against AS Tempete Mocaf and AS Sonidep, respectively.

Al Nasr had lost the reverse fixture 1-0, so the eventual 3-2 aggregate success sees the Libyans progress to the last 32 of the competition.

USM Alger, on the other hand, had picked up a 2-1 win on the road and just had to see off Sonidep to progress. The Algerian outfit did that to record a 5-2 aggregate victory.

The final game between Al-Hilal Omdurman and Rayon Sports ended goalless, but the Sudanese club progress by virtue of the away goals rule, as the first meeting in Rwanda ended 1-1.

[LISTEN] “Amaju Pinnick and I did not want our countries to be paired for...