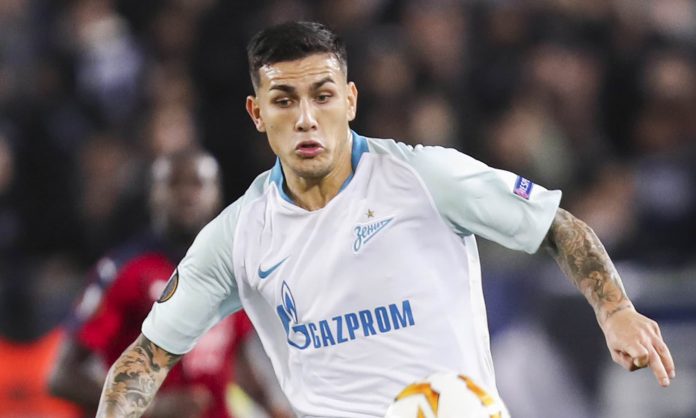 Chelsea have marked out Leandro Paredes as a replacement for the departed Cesc Fabregas and the Blues have made ‘an opening offer for £26.8million’ to Zenit St Petersburg.

Fabregas ended his time at Stamford Bridge to join Thierry Henry’s Monaco in Ligue 1 and Chelsea boss Maurizio Sarri is keen to bolster his options in the centre of the pitch.

Zenit will need convincing to sell at that price, report the Evening Standard, having signed Paredes for £24m from Roma in 2017.

Paredes has nine caps for Argentina and is believed to be keen on a move back to his homeland to join Copa Libertadores finalists Boca Juniors.

But Chelsea look ready to enter the race and according to the report, the west London club are willing to offer a four-and-a-half year contract with a basic salary ‘worth around £80,000-a-week’.

Summer signing Jorginho is carrying the weight of expectation in central midfield at this moment and with the club’s bid for a top four finish far from secure, Sarri is under pressure to strengthen in January.

The Italian midfielder struggled in the weekend win over Newcastle and Sarri said afterwards that he would have been hauled off had Fabregas been available from the bench.

As it turned out Fabregas was turning out for Henry’s side against Marseille as the two sides played out an entertaining 1-1 draw.

Cagliari star Nicolo Barella is another player to catch Sarri’s eye but he is said to favour staying in Italy.

If Barella is the man for Chelsea, they face strong interest from Napoli and Inter Milan to get him this month.

By Nathan Salt For Mailonline