Chelsea host Tottenham Hotspur this Sunday at Stamford Bridge in a meeting of two sides growing into title contention. As the duopoly of Liverpool and Manchester City threatens to fall apart, Frank Lampard and Jose Mourinho are positioning their teams as possible successors. Both are in exceptional form and have promising numbers to boot.

Tottenham haven’t lost a Premier League game since the first match day; Chelsea haven’t lost since the second. Chelsea are top of the league for goals scored (22); Tottenham are right behind them on 21. Both are also capable at the other end – no team has conceded fewer than Spurs’ nine goals, while no team has kept more clean sheets than Chelsea‘s four.

Here, we at Tribal Football look forward to the game with a special tactical preview. In it, we will assess both teams’ strengths and how they may seek to nullify one another.

There is a belief that Harry Kane has developed into a different player this season, but in reality he is just being deployed slightly differently. Mourinho has Tottenham defending deeper, something backed up by Understat’s PPDA (passes per defensive action) metric. Currently, Spurs allow the opposition to make 10.1 passes on average and last season the number was 10.9, while in Mauricio Pochettino‘s final two seasons it was much lower (9.4 and 7.6).

Tottenham are pressing with less intensity and focusing on razor-sharp transitions, so Kane is naturally picking the ball up in deeper areas with more space ahead of him to play into. And he’s exploiting that space, using intelligent spotting of runs and excellent passing to orchestrate counter-attacks. But this isn’t the only reason Kane is standing out.

Last weekend, as Spurs defeated Manchester City 2-0, Kane was constantly finding space in midfield. This was because he dropped deep, alongside Tanguy Ndombele, to almost form a midfield box when Tottenham built possession.

City found this difficult to handle for two reasons.

Chelsea have found form playing a 4-3-3 that, defensively at least, isn’t entirely dissimilar to the way Manchester City set up last weekend. But if they continue with that shape, they will face the same problems relating to Kane’s position.

As fierce a counter-attacking side as Tottenham are, they will come up against a tougher opponent this Sunday. Chelsea are aggressive when pressing in defensive transitions, willing to tactical foul, and they have players with the physical, athletic and tactical profile to defend counters. Kurt Zouma is capable of keeping pace with and obstructing quick strikers, while N’Golo Kante is astute at reading play, covering ground, applying pressure, and winning tackles. 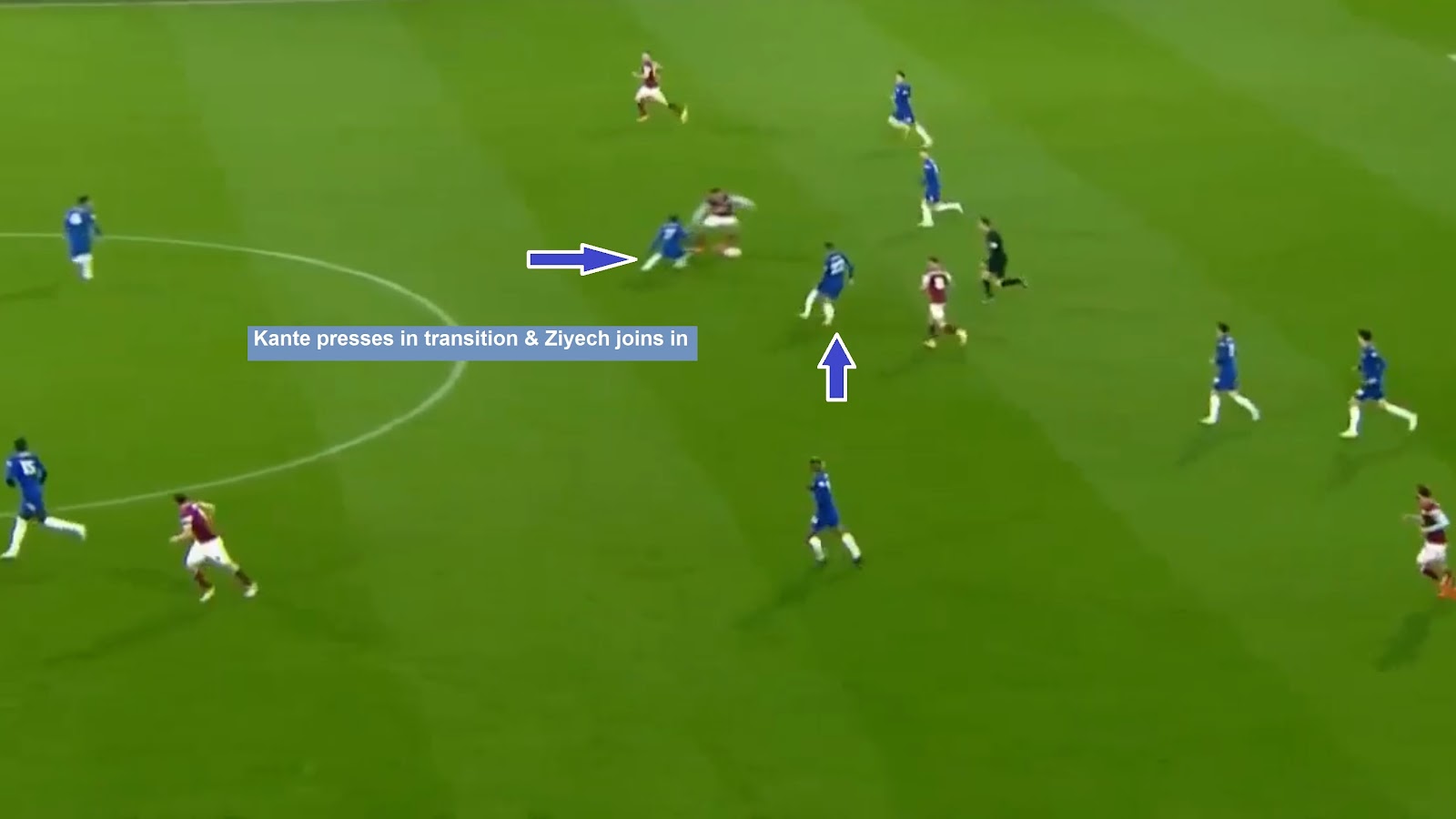 If Lampard continues with the 4-3-3 system, Kante will be particularly important as the solitary pivot when it comes to taking Kane’s space away. He will need to judge correctly when to cover the Tottenham striker and when to go to Ndombele. Chelsea like both full-backs to push high when attacking, so Kante will be responsible for protecting the centre-backs in these situations.

There is, however, a straightforward alternative. Lampard is not shy to make big decisions for big games, like he did when going to a back three to beat Tottenham last season. Now he has a winning system he may be less inclined to radically change, but a slight adjustment could help his team.

READ  GFA Congress: No more videoconferencing, congress will be face-to-face

Chelsea could still play their 4-3-3, but defensively could move into a 4-2-3-1. Mateo Kovacic could drop back alongside Kante, helping him cover Kane and Ndombele. This would mean committing fewer players forward in pressing, but the risk of giving Pierre-Emile Hojbjerg and Moussa Sissoko time on the ball is lower than the risk of giving space to Kane or Ndombele between the lines.

When discussing how he led Inter Milan to victory over Pep Guardiola‘s Barcelona back in 2010, Mourinho has spoken of how he wanted to create a ‘cage’ around Lionel Messi. The same description is appropriate when describing how his Tottenham side handled Kevin De Bruyne and Bernardo Silva last weekend.

Manchester City like to play through their No.8s, but neither were given time or space by Spurs’ defensive setup. Hojbjerg and Sissoko worked incredibly hard to nullify the threats posed by De Bruyne and Silva. This included the following defensive tasks.

1) Shifting over to double up on them with the wingers (Son and Bergwijn), reducing their space. 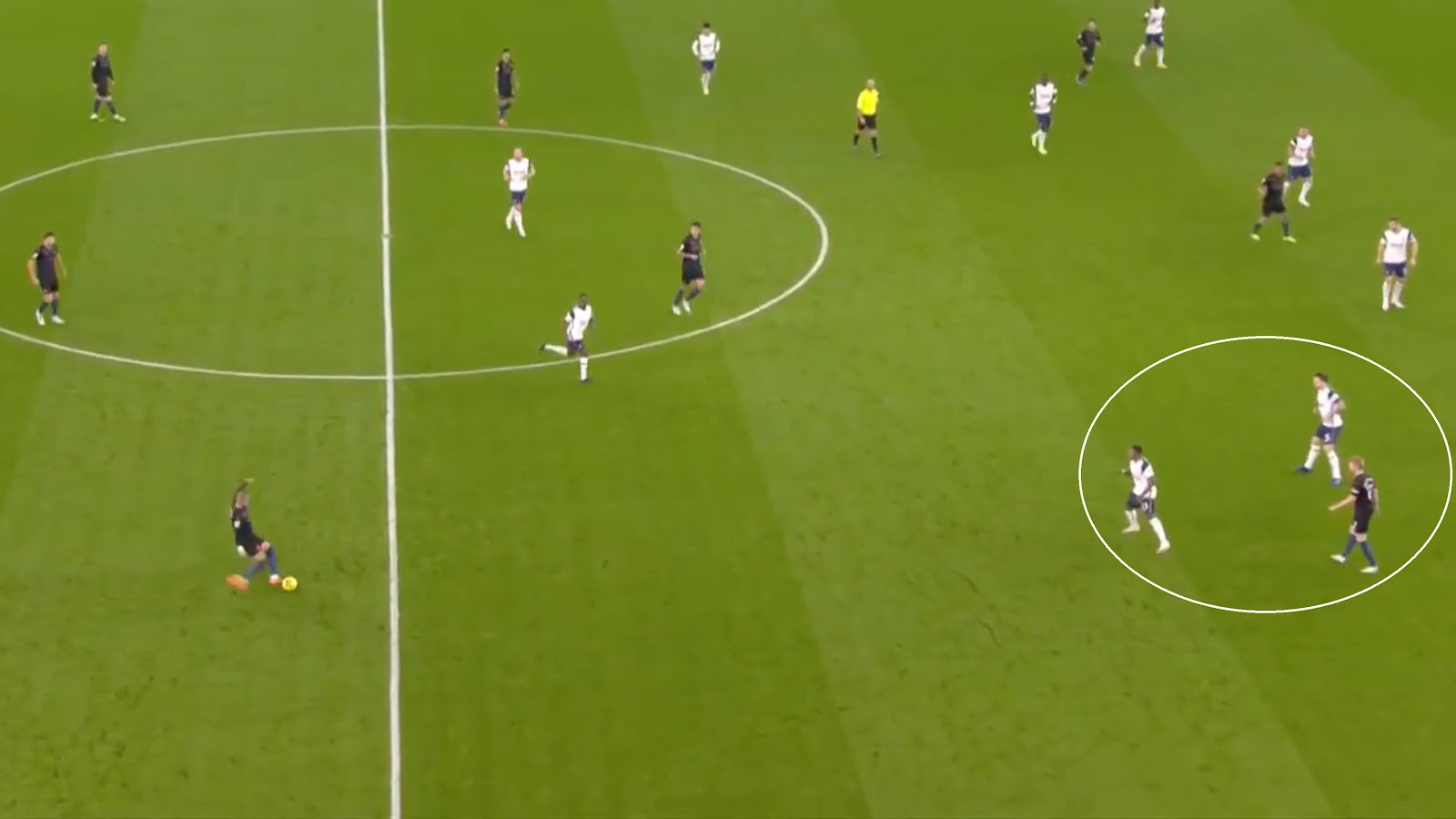 2) Man-marking them when appropriate (below Sissoko makes physical contact with Silva). 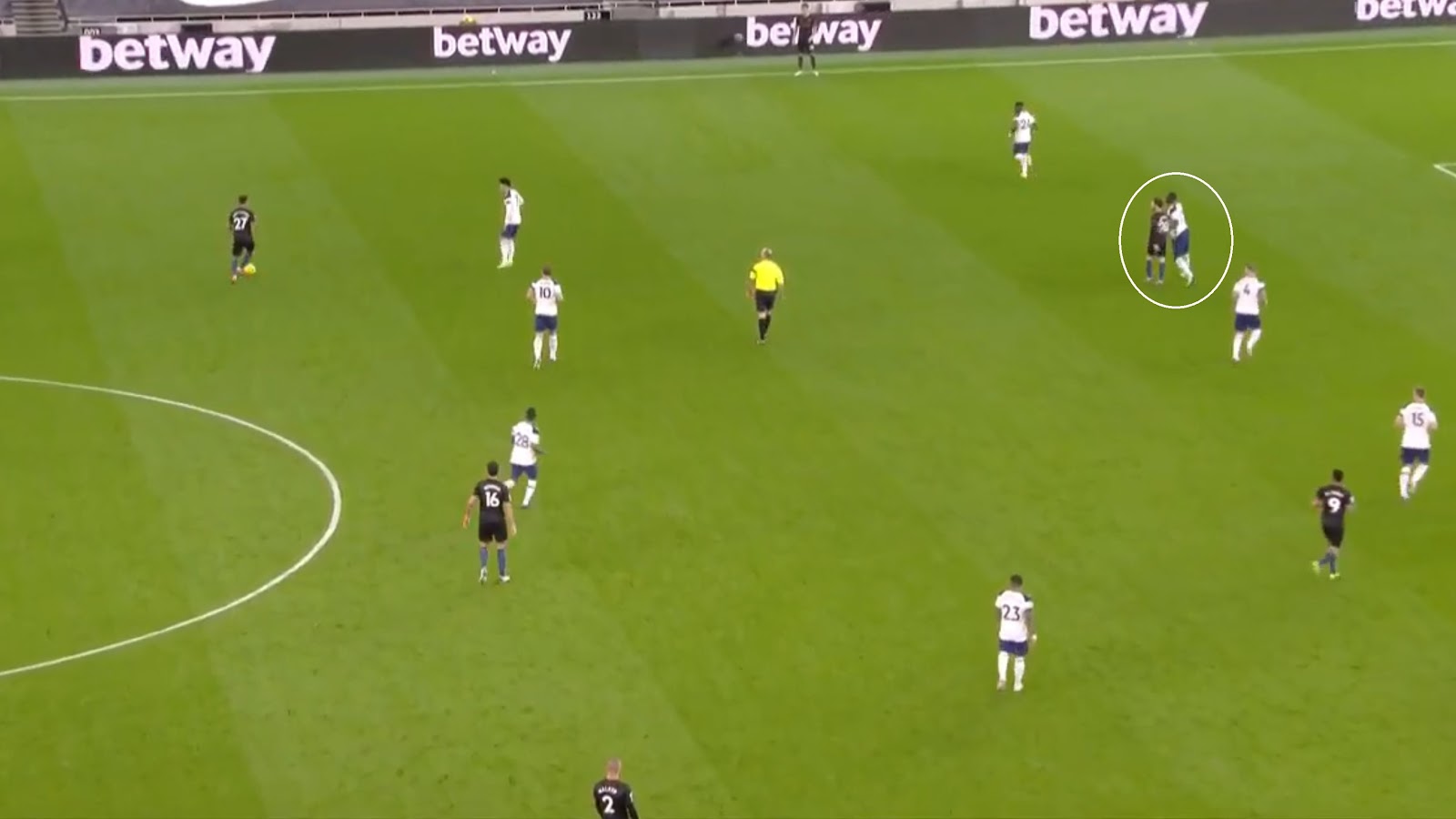 3) Tracking their runs behind the full-backs when necessary (below Hojbjerg tracks De Bruyne). 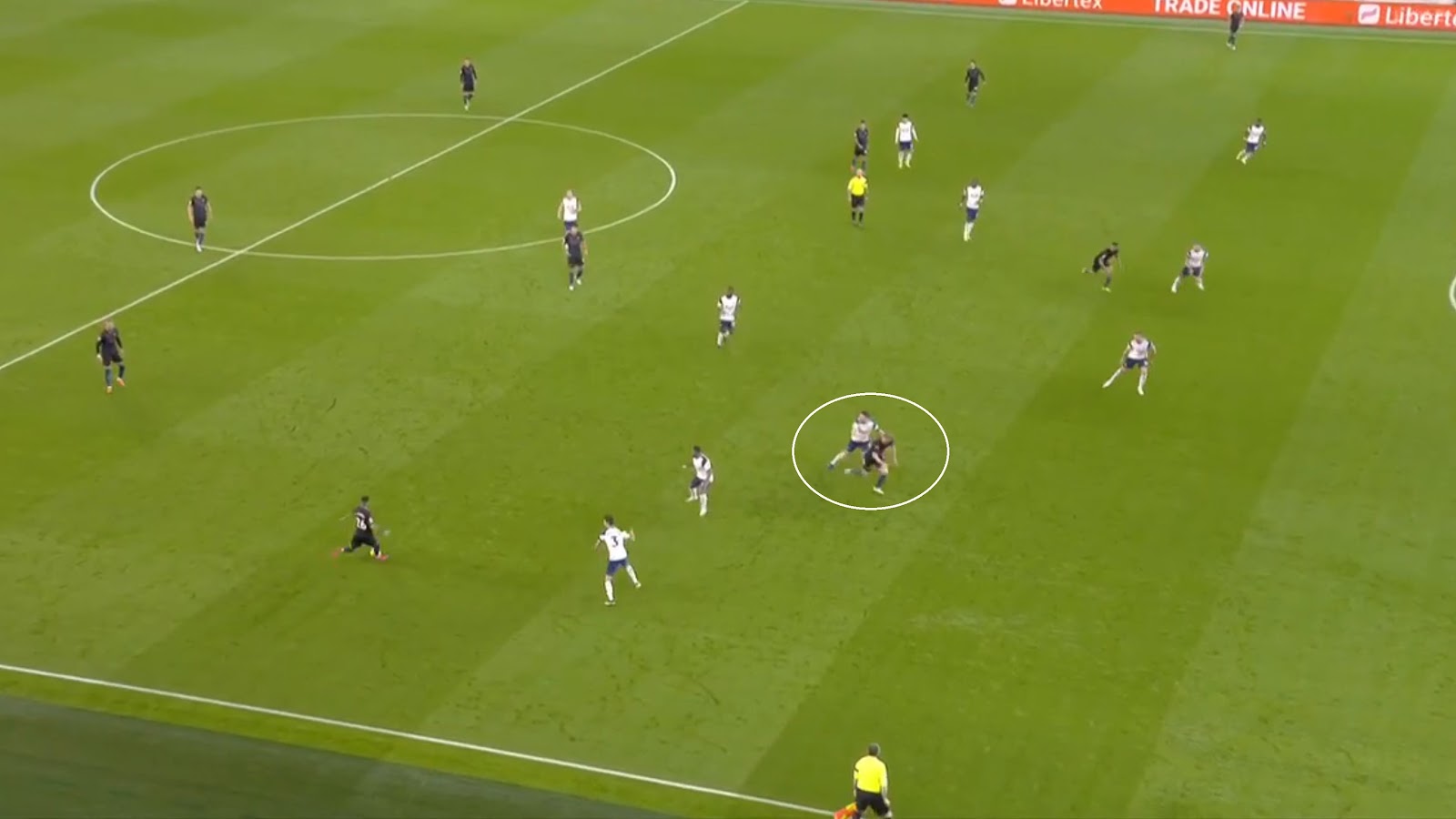 However, it’s unlikely that Tottenham can just copy and paste this strategy for the game this weekend. Chelsea play a 4-3-3 like Manchester City, but they tend to build attacks differently.

Like Spurs, Burnley defend in a fairly passive 4-4-2 that can sometimes feature more aggressive pressing, so Chelsea‘s clash with the Clarets is perhaps a good indicator of how things will look on Sunday. Against Burnley, Chelsea‘s No.8s (Mason Mount and Kai Havertz) dropped on the outside of the opponent’s front two to collect the ball from the centre-backs. 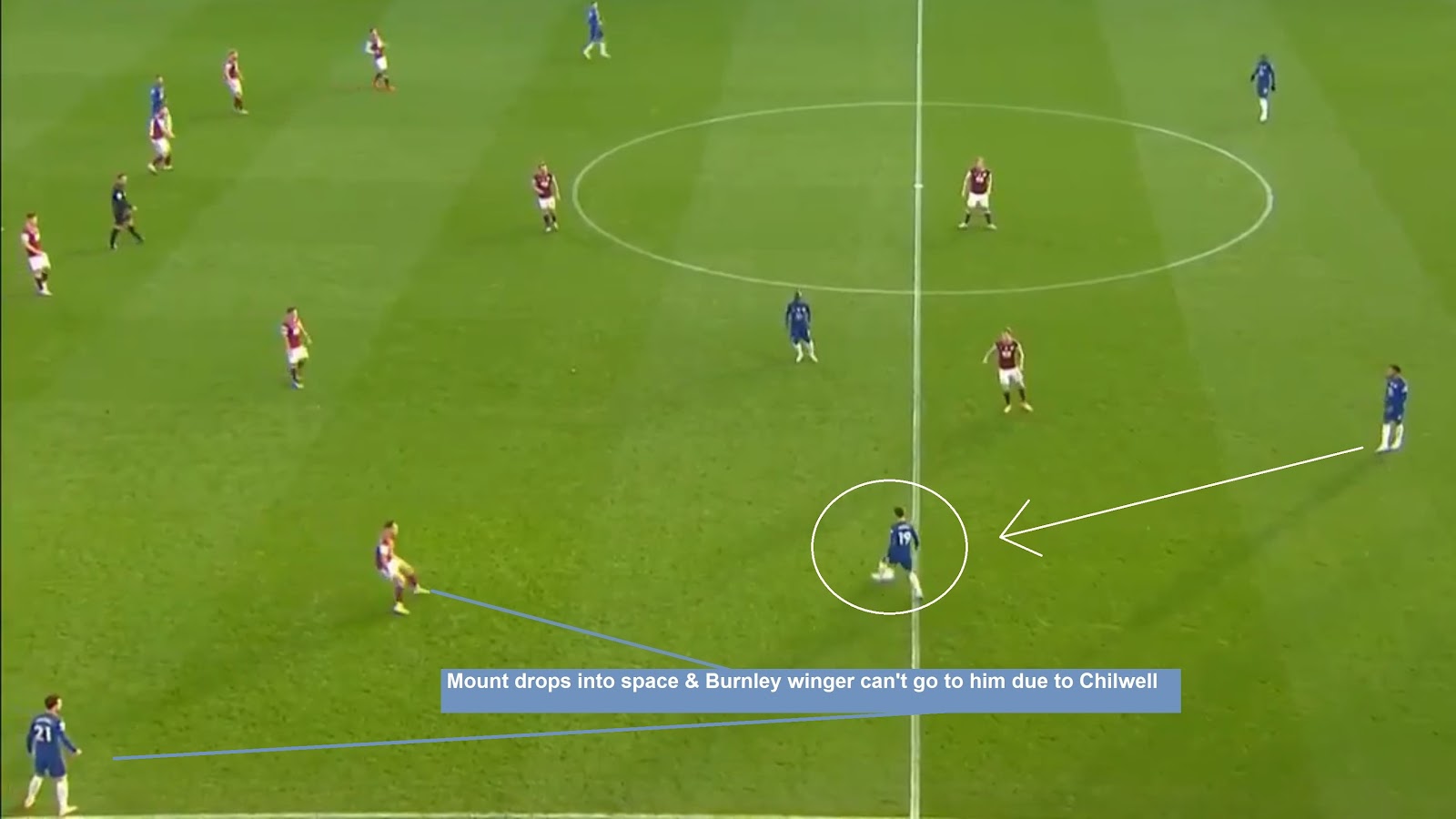 Burnley‘s wingers were pinned back by Chelsea‘s overlapping full-backs, Reece James and Ben Chilwell, and their central midfielders didn’t want to stray too far from their positions to close down, so Mount and Havertz could receive and turn in space before moving the attack forward through dribbles, through balls or switches of play.

Tottenham will find it harder to cage Mount and Havertz or Kovacic than they did De Bruyne and Silva, so they may simply concede possession in these scenarios and drop into a low block.

Sports24online - September 12, 2019 0
Barcelona and Inter Milan legend Samuel Eto'o has decried the lack of respect given to African stars on the global scene despite their achievements. Eto'o,...

GFA committed to creating more opportunities for referees in Ghana –...

Coutinho continues to impress at Bayern

GFA problems can only be solved by ‘football people ’- Osei...

FEATURE: From Tamale to FC Porto, the story of Mahey –...