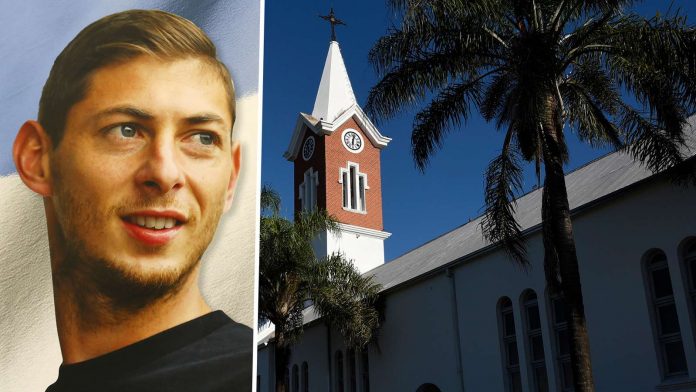 The ceremony will take place in the Cardiff City striker’s hometown of Progreso in the Santa Fe province at 10:00 GMT (07:00 local time)

Emiliano Sala’s funeral will take place in Argentina on Saturday in a private ceremony in his hometown of Progreso.

The Cardiff City striker’s body was found in the wreckage of the plane that had gone missing and was eventually found to have crashed over the English Channel on January 21.

Sala had been travelling back from Nantes after saying goodbye to his team-mates as he headed to Cardiff, along with pilot David Ibbotson, who remains missing, to link up with his new team following his club-record transfer.

The 28-year-old’s body was recovered from the plane and identified on February 7,  with the football world having been paying tribute to Sala following the confirmation of his tragic death.

A post-mortem examination later concluded that Sala’s passing was caused by injuries to his head and trunk,  with the striker having to be identified by means of fingerprint evidence analyses.

Sala’s body was flown to Buenos Aires on Friday afternoon ahead of the funeral on Saturday, which is scheduled to take place at 10:00 GMT (07:00 local time).

Ahead of the arrival of Sala’s body, his boyhood club San Martin de Progreso posted an emotional tribute on Facebook on Tuesday, writing: “We are waiting for you…like the first day you left but this time to stay with us forever.

“You went and you are an example for everyone. Eternally in our hearts.”

Another of Sala’s former clubs Nantes also paid tribute to the Argentine as they wore an all-black kit for their Ligue 1 clash with Nimes on February 10, with Sala’s name printed on the back of every shirt.

They had also previously announced that they will retire their No.9 shirt in his honour.

With pilot David Ibbotson remaining missing, the 59-year-old’s family are still hopeful of resuming the search to locate his body.

A  GoFundMe page is accepting donations, with the family stating they “are relying on the kindness of the good hearted people to help us raise the much needed funds to help us find our beloved Dad, Husband and Son”.