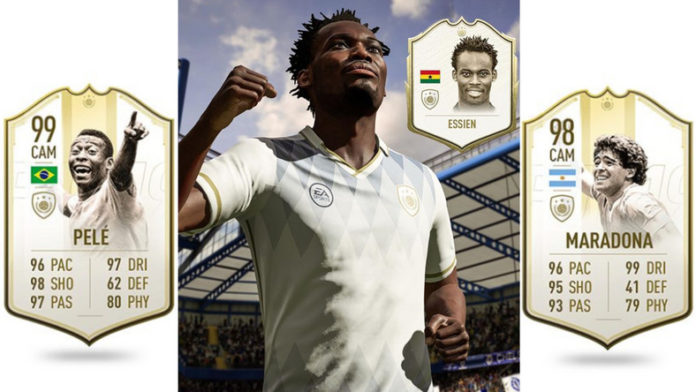 Michael Essien is only the second African player to make FIFA 20’s Icon list. Drogba was the first.

EA Sports has announced some exciting features about the upcoming FIFA 20 game.

Among improvements in the release includes changes in the most popular game mode, the FIFA Ultimate Team.

The next edition of the game franchise also has seen some changes in Career Mode, Pro Clubs and new game mode known as VOLTA Football.

Ghanaian player Michael Essien has been added to the list of players who will make the FIFA 20 Ultimate Team Icons.

With an already existing list of great players of the game including Schmeichel, Carles Puyol, Cannavaro, Gerrard, Seedorf, Best, Pires, Deco, Van Nistelrooy as icons, making the list is no cheap feat.

Didier Drogba is the other African player who makes the exclusive list.

He played for other clubs including AC Milan, Panathinaikos and Persib Bandung.

EA Sports has not revealed Essien’s attributes yet as an icon but fans are already calling for a 99 in shooting, long-range to be precise.

Others are also not enthused about the Ghanaian making the icon list claiming he is not retired yet. Some fans in the comments section also asked for Samuel Eto’o to be including.

There were however positive comments with one stating his ‘unpopular opinion’ that Michael Essien is greater than Steven Gerrard.

Go and disgrace yourself again – Alhaji Grunsah to Kotoko, Ashgold

Liverpool CONFIRM Date and Time for trophy parade if they win EPL or UCL...