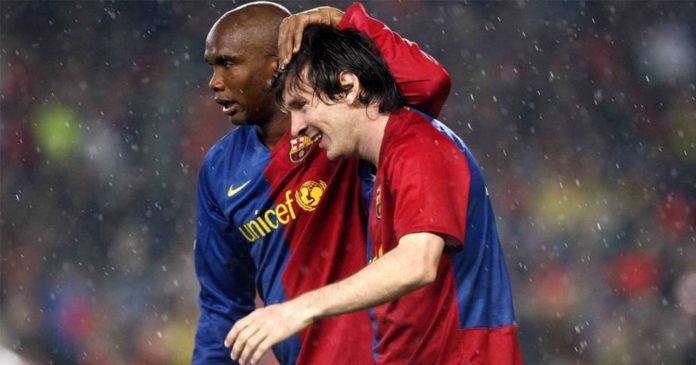 However, it’s not only about Barca when it comes to the clash between his former teams.

“I want it to be a close game,” says Eto’o ahead of Barcelona and Inter’s face-to-face encounter on Wednesday.

The Cameroonian hopes that Lionel Messi won’t hurry his recovery tempo and leaves Samuel’s former side a chance to win a point.

“I hope he won’t play against Inter. It’ll be much more difficult if he plays.”

“Barcelona have made a slow start to the league because Messi played very little. If he’s there, the real Barcelona is seen.”

Eto’o recalls his best times at Barca and praises himself for turning Messi into a mature player.

Samuel Eto’o joined Barcelona in 2004, so no wonder that Lionel Messi managed to spend much time playing alongside the Cameroonian. The duo has reached its peak level in the 2008/09 campaign when Barcelona finished the season with a treble.

Recently, the 38-year-old has announced his retirement after a fruitful career in which he played for 13 different clubs.

RTU coach Shaibu Ibrahim Tanko – We are playing beautiful football but our results...