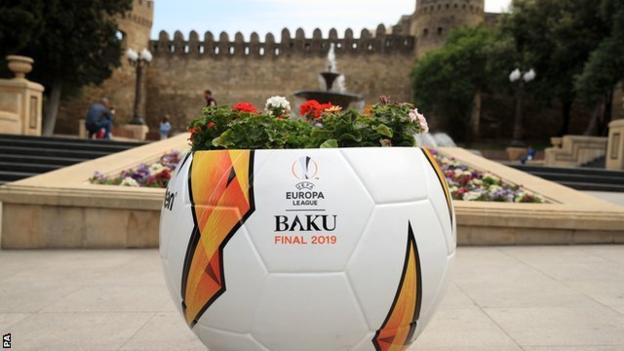 There is speculation that, win or lose in Baku’s Olympic Stadium, it could be Blues boss Maurizio Sarri’s final game in charge.

He refused to discuss reports linking him with Italian side Juventus on the eve of the final, saying: “I have a contract with Chelsea for two years.

“So, first of all I will speak with Chelsea but this is not the moment.”

Sarri has had a turbulent first campaign at Stamford Bridge, frequently questioning the mentality of his squad and having a public fall-out with Kepa Arrizabalaga during the Carabao Cup final.

But, as he reflected on the past 11 months, he suggested his feelings for his players will play a part if he does have a decision to make about his future.

“For me, at the beginning of the season it was really very difficult to understand my players, to understand the mentality,” Sarri explained.

“But after a very difficult month in January, in February they started to change, I think. Or probably I changed – I don’t know.

“In this moment, I love them because I have 20, 22 wonderful men, and wonderful players. So now I am really very happy with them.

‘Arsenal’s first target is a trophy – not Champions League place’

Sarri, 60, has never won a major honour as a manager, while his Arsenal counterpart Unai Emery has won this competition three times with Sevilla between 2014 and 2016.

His current club has had rather less success on the continent, however.

While Chelsea won the Europa League in 2013, a year after their triumph in the Champions League, Arsenal have not clinched a European title since they won the now obsolete European Cup Winners’ Cup in 1994.

Emery insists ending that 25-year wait is his first objective in Azerbaijan, despite the game also being his side’s last chance of making next season’s Champions League after a two-year absence – with qualification likely to significantly increase their summer transfer funds.

“There are two targets here but the most important target for us is to win a title,” the Spaniard said on Tuesday.

“The second target is to help us to achieve the Champions League.”

Emery does not feel the game means less to Chelsea because the Blues are already in the Champions League after finishing third in the Premier League table.

“Each title is very important for us, and for Chelsea too,” Emery added. “We want to enjoy this moment, for our fans and also for ourselves. Chelsea will have the same idea.”

Blues defender David Luiz agreed when he faced the media later on Tuesday, adding: “This competition is not about the Champions League.

“It is about a big trophy – everybody wants to win this competition when they start out in it, and we want a repeat of 2013, with a win.”

There is last-minute work going on all over Baku ahead of the final, with workers planting flowers in fan parks and painting roads outside the airport the day before the game.

Chelsea are also leaving it late before deciding if France midfielder N’Golo Kante is fit enough to face the Gunners, after he suffered a knee injury on Saturday.

“It is not as serious injury but the problem is the timing,” Sarri said. “He is 50-50 at the moment. We will try to recover him, but we don’t know.”

Ruben Loftus-Cheek and Callum Hudson-Odoi are already ruled out, and Kante’s absence would leave Jorginho, Mateo Kovacic and Ross Barkley as Chelsea’s only three fit midfielders.

“We are in trouble with the midfield,” Sarri added. “At the moment we have only three midfielders for three positions.

“For us N’Golo is very, very important. He is the only defensive midfielder that we have so we are trying to recover him and we will try on Wednesday morning.”

Cech must wait to find out about farewell

Arsenal are definitely without Armenian midfielder Henrikh Mkhitaryan, who decided not to play for security reasons because of a dispute between his country and Azerbaijan.

Injured midfielder Aaron Ramsey has already played his last match for the club before his summer move to Juventus but Emery must decide whether veteran goalkeeper Petr Cech will start against his former side in his final game before retirement.

“I speak about Petr a lot but above all he is a great man and a great professional. His behaviour in his year with us has been amazing.

Emery said reports that Cech, 37, will become Chelsea’s sporting director in the summer will not influence his decision.

“He can start or not start, I have to decide, but he deserves trust because his career says to us he is a gentleman,” he said.

“Really, how can we not believe in him?”

The build-up to the final has been overshadowed by the problems fans of both sides have had getting to Baku.

There could be as few as 5,000 Chelsea and Arsenal fans inside the 70,000-capacity stadium, with the rest of the crowd made up of locals, neutrals, sponsors and Uefa dignitaries.

“They have arranged to play here and I must respect that decision. Of course, I would prefer it if a lot of supporters for us and Chelsea can come here, but it is difficult for them.”

Sarri added: “I am really very disappointed. We do this job for this kind of match so we hope to see our fans here.

“I don’t know what to say other than we will try to win, for us and also for them.”

Unlike Chelsea, Arsenal have already released plans to hold a trophy parade – in Islington on Thursday – if they are the team who triumphs.

Chelsea captain Cesar Azpilicueta said: “They have to plan for this, but hopefully we can ruin it. Our job is to play the game and to win the trophy.

“We didn’t plan a parade but that doesn’t mean we are not hungry and determined to win the trophy.

“We will give everything. It is the last game of a long season.

“When you have a trophy to play for in the middle, you get energy from everywhere and hopefully all together we can get our hands on it.”

The French League 1 season ended due to coronavirus