Arsenal midfielder Aaron Ramsey, 28, has signed a pre-contract agreement with Juventus and could join the Italian club this month. (Sport Mediaset via Calciomercato)

Morata would prefer to move back to Madrid if he was to leave Stamford Bridge but would only be allowed to leave should Chelsea find a replacement for him during the January transfer window. (Sun)

Manchester United are likely to resist any approaches this month for Ivory Coast defender Eric Bailly, with Sevilla keen to take the 24-year-old on loan. (Telegraph)

Nice’s Italian striker Mario Balotelli, 28, could be set for an unexpected return to the Premier League with Newcastle United.(Mirror)

Mesut Ozil’s future with Arsenal will not be decided until the end of the season after both the 30-year-old midfielder and the club played down the possibility of a transfer this month. (Evening Standard)

Chelsea will make a decision on striker Tammy Abraham by 14 January. The 21-year-old is on loan at Aston Villa but can be recalled two weeks into the January transfer window due to the terms of the deal. (Telegraph)

Chelsea have decided against a January move for Argentina striker Gonzalo Higuain, 31, who is on loan at AC Milan from Juventus. (Goal)

Cesc Fabregas will not be allowed to complete his move to Monaco until Chelsea have secured a midfielder to replace the 31-year-old Spaniard. (Calciomercato)

Real Madrid goalkeeper Keylor Navas, 32, linked with Arsenal in recent weeks, has renewed his contract with the Spanish club for an extra year, to June 2021. (Marca)

Bayern Munich have made a third bid in excess of £30m for Chelsea attacking midfielder Callum Hudson-Odoi, 18. (Sky Sports)

Chelsea are hoping to convince Hudson-Odoi to sign a new contract despite a third bid from Bayern Munich. (Mail)

Crystal Palace have made a £6.5m bid for Everton and Senegal striker Oumar Niasse, 28, after a loan deal for Liverpool forward Dominic Solanke fell through. (Sun)

Paris St-Germain have made an offer that Barcelona will not be able to match to sign midfielder Frenkie de Jong, 21, and centre-back Matthijs de Ligt, 19, from Ajax. (Marca)

Leicester have received an approach from Spanish side Villarreal for midfielder Vicente Iborra, but the two clubs are still to finalise a deal for the 30-year-old Spaniard. (Leicester Mercury)

Cardiff and Bournemouth are both keen to sign Liverpool defender Nathaniel Clyne. The Cherries want to bring the 27-year-old to the south coast on loan for the rest of the season. (Mail)

Nottingham Forest have been linked with a move for Portsmouth winger Jamal Lowe, 24. (Nottingham Post)

Former Birmingham and Derby boss Gary Rowett may have to avoid an FA Cup upset at Shrewsbury on Saturday to save his job as manager at Stoke. (Telegraph) 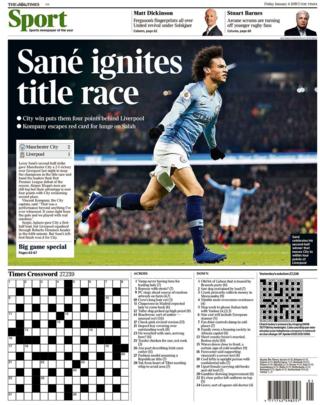