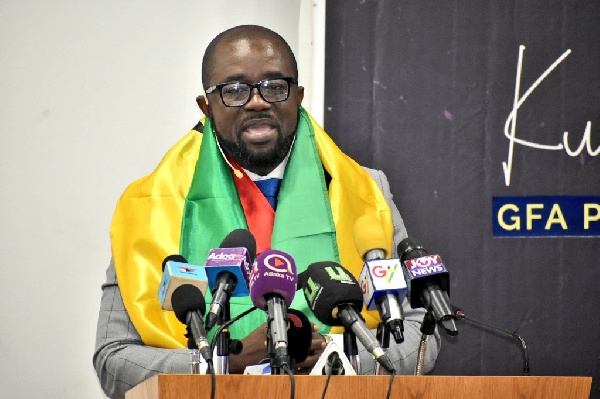 Executive Chairman of Dreams FC Kurt E.S Okraku has officially unveiled his manifesto dubbed #GameChanger, in the bid to win the GFA Presidency.

The event was staged at the Ghana Exim Bank Auditorium in Accra on Tuesday September 24.

George Afriyie displayed a great deal of maturity by being the only aspirant to show up at the event with Palmer delegating Ebo Appiah to represent them.

With the slogan ‘#GameChanger,’ Kurt is hoping to become the successor of Kwesi Nyantakyi to take Ghana football to another height as a powerhouse in Africa Football.

The GFA Presidential election is slated for 25th October in Accra.

See also  Ghana DOL: RTU will not be required to compete in the opening weekend of the 2020/21 DOL

[A MUST READ] MAGICAL! Mourinho agrees to grant the wish of a journalist’s late father at press conference