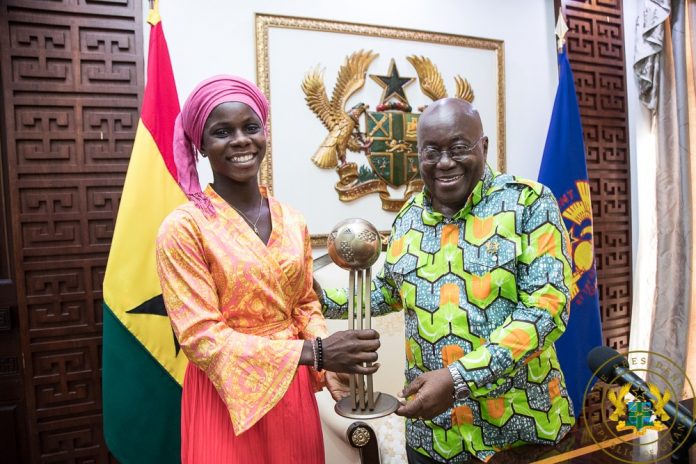 The Youth and Sports Minister Isaac Kwame Asiamah yesterday, presented a cheque of GHC 30,000 to Black Maidens and Queens Striker Abdulai Mukarama on behalf of H.E Nana Addo Dankwa Akufo-Addo the president of Ghana for her excellent performance that won her the  golden boot and bronze ball awards at the FIFA U-17 World Cup in Uruguay last year.

She was also at Jubilee House on Thursday, 20th June, 2019 to present the Golden Boot and the Adidas Bronze Ball she won at the tournament tothe president.

Mukarama Abdulai won the Golden Boot after finishing as top scorer of the 2018 FIFA U-17 Women’s World Cup staged in Uruguay.

The 16 year old forward scored seven goals in the competition though the Black Maidens were eliminated in the quarter finals stage of the competition.

Boost for Ghana juvenile football: Premier, Division One League clubs to own U-17 juvenile clubs