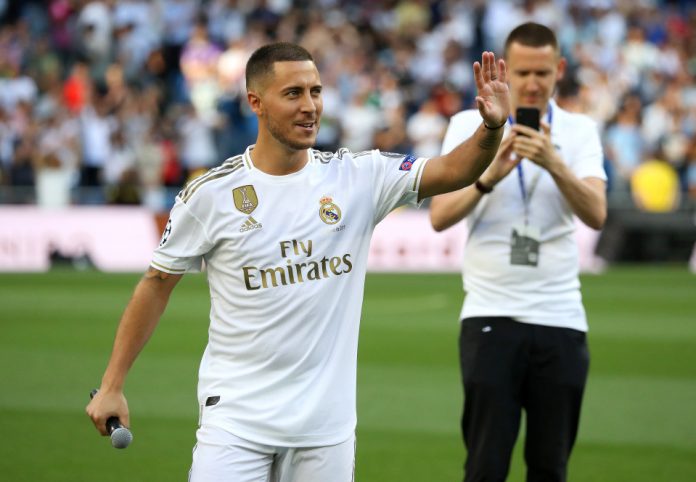 Last season Real Madrid picked up their lowest points tally in 17 years. Finishing on 68 points, with 12 defeats in 38 games, they finished well behind La Liga champions Barcelona. On top of that, the only trophy they picked up was the FIFA Club World Championship, which made it one of their worst years for silverware in the last decade, and they exited the Champions League in the second round, which was their earliest elimination since 2010.

Those numbers make for painful reading, so it’s no surprise that Los Blancos have wasted no time getting to work in the transfer window. They quickly secured the signatures of three highly rated and promising players in their respective positions – centre-back Eder Militao from Porto, left-back Ferland Mendy from Lyon, and striker Luka Jovic from Eintracht Frankfurt – but their biggest addition of the summer is that of Eden Hazard.

The Belgian creator, who was once again Chelsea‘s best player last term, is widely accepted as one of the finest attacking players on the planet. And, at a time when Real Madrid‘s power, both domestically and on the continent, appears on the wane, his arrival is a huge boost. However, where exactly will he fit in? Here, we at Tribalfootball analyse what his signing means for the team.

During his first spell as Real Madrid manager, Zinedine Zidane usually deployed a 4-3-3 system that involved Cristiano Ronaldo coming in from the left flank to act almost as a support striker behind Karim Benzema. Given he has used the 4-3-3 consistently since returning, there is a good chance he will continue with this system next season.

Hazard could benefit similarly from a left-sided role in such a system, though he wouldn’t operate in the same way Ronaldo did. While the Portuguese looked to attack the opposition penalty box and use his outstanding aerial ability to get on the end of crosses from wide, Hazard prefers to play on the outskirts of the box, getting the ball to feet, dribbling beyond defenders and combining with his teammates to create shooting opportunities for himself and others.

It’s also worth noting, however, that Zidane switched to a 4-3-1-2 system when he lost Gareth Bale to injury. Without the Welshman he lacked one of his key wide forwards in the 4-3-3, so he introduced Isco to a free role between the midfielders and a front two featuring Benzema and a fully converted Ronaldo.

Given Real Madrid lack the same quality of wide players today – Bale has dropped off, while Lucas Vazquez and Marco Asensio have yet to fulfil their early potential – it is possible that Zidane may reconsider the 4-3-1-2 system once again. If so, Hazard could take on the ‘Isco role’ and play with creative license, wandering laterally and vertically to connect attacking moves and drive forward with the ball at feet. 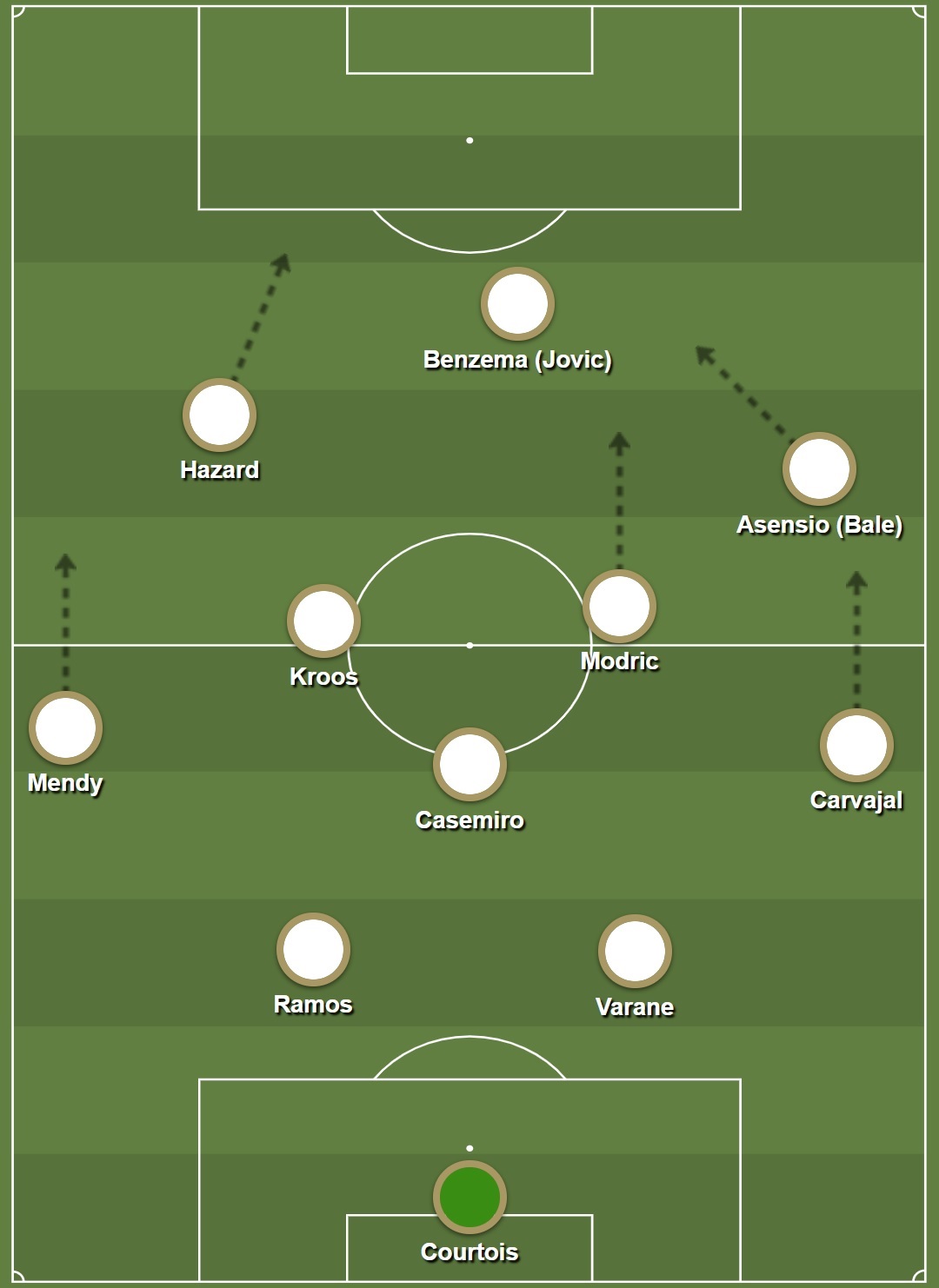 The likelihood, however, is that Zidane will stick with the 4-3-3 as this allows Hazard to operate in and around the left inside channel, where he has often played his best football. During Antonio Conte‘s first year at Chelsea, he deployed the Belgian as a left inside forward in a 3-4-2-1 system that saw player and team succeed – Chelsea won the league while Hazard scored 16 goals, a tally he never topped during his time at Stamford Bridge.

Hazard enjoys playing in the left inside channel as it allows him to dribble towards the centre, onto his favoured right foot, and commit defenders. He thrives in tight areas, using his ball control, quick feet and surprising strength to hold off markers and open up back lines. If deployed through the centre, he often has to face away from goal when receiving, which makes it harder for him to turn; if deployed out wide, the greater distance between him and the centre means he has more work to do to get into position to work a shot.

Enabling his playing in the inside channel will be an attacking left full-back. At Chelsea, Marcos Alonso provided the width in Conte’s wing-back system; at Real Madrid, it will be Marcelo or fellow new arrival Mendy.

Marcelo has been one of the best attacking full-backs in the last decade or so, with his exceptional dribbling qualities and pinpoint crossing making him a serious threat out wide and allowing Ronaldo to drift into more central zones. However, at 31 and having just played his fewest total league games since 2012-13, he may lose out to Mendy. Fortunately, the Frenchman looks equally capable going forward, having averaged more dribbles (1.8 to 1.4) and almost as many key passes (1.3 to 1.4) per game than Marcelo last term whilst playing for a less dominant and attacking Lyon side.

HOW HAZARD WILL IMPROVE REAL

Real Madrid have a reputation for signing the world’s best individuals, but it’s a long time since they signed someone of Hazard’s stature. The last true ‘galactico’ they brought in was James Rodriguez in 2014, while the last time they spent more money on one player was Gareth Bale in 2013 (he cost just under £1 million more than Hazard’s £90 million fee, according to Transfermarkt).

While Mendy, Militao and Jovic are all under 25 and have been brought in to add depth and potential to an ageing squad, Hazard – who at 28 is arguably in his prime – has very much been added for the here and now. In order to assess just how much he’ll improve the team’s attack, it’s worth comparing him statistically to other candidates for the wide forward roles in Zidane’s system.

Last season, while playing for Chelsea, Hazard scored 16 league goals. That’s more than Bale, Asensio and Vazquez scored for Real Madrid put together (10). It’s worth bearing mind at this point that he played 2926 minutes, while the Real trio combined played 5075. He also got more assists (15) than the Spanish side’s trident put together (again, 10).

Hazard also averaged significantly more passes per game (49.2) which suggests he gets more involved in the team’s attacking play. On top of that, his pass completion rate of 84.3 per cent was bested only by Asensio’s 86.8 per cent. In addition, he averaged more crosses and more through balls than Bale, Asensio and Vazquez.

With quality strikers to drag defensive lines deeper and combine with in Benzema and Jovic, quality midfielders supplying him in Luka Modric and Toni Kroos, as well as left-backs who overlap and will allow him to play closer to his favoured position, the tactical foundations are already in place. Hazard can fit right into Zidane’s system, and he should markedly improve Real Madrid‘s attacking output.