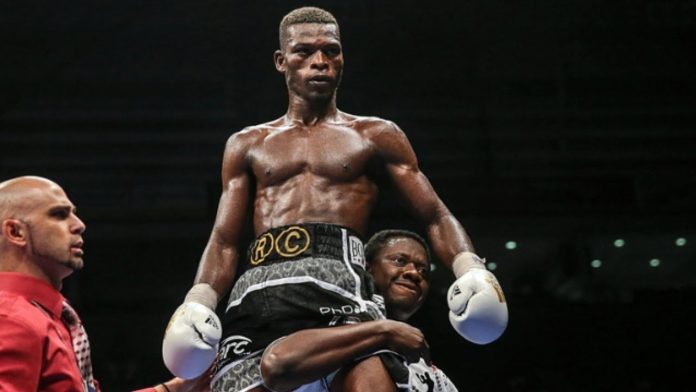 Teofimo Lopez secured a guaranteed title shot upon his latest win, though admitting there were personal and emotional issues in need of resolution before moving forward with such a fight.

He now has 30 days in order to keep his place in line.

The International Boxing Federation (IBF) has formally ordered a mandatory title fight between defending champ Richard Commey and Lopez, the unbeaten number-one contender. Both athletes and their respective promoters were notified on Friday morning via official company letter, a copy of which has been obtained by BoxingScene.com.

The two sides are granted a 30-day free negotiations period to come to terms. A deadline of Sept. 7th is in place, at which point a purse bid hearing will be called and open to all IBF-registered promoters.

Either party can call for a purse been hearing at any time during the negotiation window, although both would be best served to take the allotted time frame in full.

Commey (29-2, 26KOs) won the title in a crushing 2nd round knockout of Isa Chaniev this past February in Frisco, Texas. The same show also saw Lopez (14-0, 11KOs)—a New York-bred product who represented Honduras in the 2016 Rio Olympics —in his first fight after being named the 2018 Prospect of the Year by BoxingScene.com.

A one-sided stoppage win over Diego Magdaleno that evening advanced him from undefeated prospect to rising contender, further enhanced by a knockout victory over Edis Tatli just two months later.

Both victories provided Lopez with dealer’s choice on which alphabet title to pursue. He chose the IBF, which led to a title eliminator versus Japan’s Masayoshi Nakatani. Lopez prevailed via 12-round decision in the July 19 ESPN+ headliner, his toughest test to date.

Afterward, he publicly admitted unresolved familial issues which impact his career—he is trained by his father Teofimo Sr., while his mother Jenny is an integral part of the team as well—as he hopes to resolve such matters during this time of reflection.

Commey has fought once since his title win, an 8th round stoppage of former titlist Rey Beltran this past June in Temecula, Calif. The ESPN headliner was a consolation prize as a lost opportunity to pursue a unification bouts with two-belt claimant Vasiliy Lomachenko.

Such a bout was in the cards heading into his vacant title fight with Chaniev, only for Commey to suffer a hand injury during the brief affair to put him on the shelf for nearly two months.

Such a fight could still be in play.

Lomachenko will face England’s Luke Campbell in an Aug. 31 bout with three belts at stake. Commey holds the last chip and is prepared to defend versus Lopez first, with the winners of both bouts to be groomed for a clash in early 2020 to declare an undisputed lightweight champion.

Should Lopez opt out of a title fight, a new mandatory will be ordered against the next highest ranked available contender. Such a development would provide Commey with a short window of opportunity to file for an exception, namely the Lomachenko-Campbell winner.

Unification bouts are among the few exceptions granted by sanctioning bodies in lieu of mandatory defenses, though often with written assurance from the defending titlist that’s such obligations are met in the next title defense.

Needless to say, the next 30 days should prove very interesting for all involved parties.