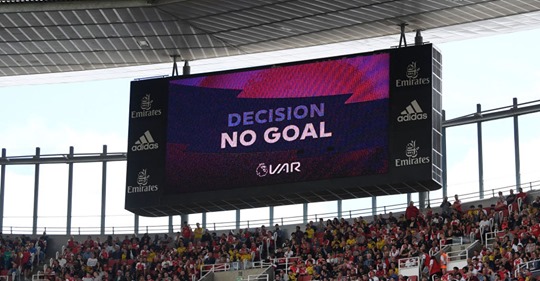 Thirty-seven players have scored so far, including hat-tricks from Manchester City’s Raheem Sterling and Norwich’s Teemu Pukki, with the added twist that every goal is now scrutinised by a video assistant referee (VAR).

“It’s killing the passion in football!” complain critics. “Players, managers and fans won’t celebrate like they used to.”

“Nonsense, it adds to the drama!” counteract others. “Football’s about entertainment. Let’s use technology to help.”

VAR has, as expected, polarised opinion. Significantly, it has been introduced in the Premier League at the same time as key amendments to the laws of the game.

Fans are getting used to acronyms: IFAB (the lawmakers), PGMOL (the referees) and VAR (the technology). Thrown together, they are creating a volatile mix.

In theory, IFAB tells the PGMOL, and every referee in world football, how to officiate a game and VAR is there to help. VAR corrects “clear and obvious errors” or a “serious missed incident” in four match-changing situations: goals; penalty decisions; direct red cards and mistaken identity.

Has it been consistently applied across competitions? No. Has it led to delays? Yes. The fact it takes more than a few seconds to review multiple camera angles shouldn’t surprise anybody. It’s exactly what every club signed up to last November. It has corrected decisions, but at what cost?

“We’ve done exactly how we have been educated,” Neil Swarbrick, the former referee in charge of VAR’s introduction to the Premier League, told Sky Sports News. “Fans have to trust in what we’re doing.”

Swarbrick warned it could take up to three years for everybody to adjust to VAR. How the new handball law has been applied has been a particular bone of contention, as have millimetre calls with offside.

“IFAB brought in 27 amendments from the start of this season,” he explained. “It’s not frustrating as far as I’m concerned. It’s probably frustrating because a lot of fans don’t pick up on the amendments of the law so, once again, it’s just educating them.”

IFAB officials have been bombarded with questions since the start of the new season and issued unprecedented ‘important clarifications’ to the media about their new laws on Wednesday night.

Lawmakers said they had received “much positive feedback” but “some apparent wrong understanding and applications of the laws.” IFAB made no reference to the handball law or its interpretation.

Premier League match officials met on Tuesday and, according to Swarbrick, were “really happy, really comfortable” with the way they have checked and reviewed around 130 incidents in the opening two rounds of matches.

“This is evolving,” he said. “The main issue we have had is the in-stadium experience for fans.”

Which is putting it mildly. Again, we shouldn’t be surprised.

IFAB don’t want instant replays shown on big screens, in case referees feel under additional pressure. The PGMOL don’t want to set a maximum length of time for each check and review, for the same reason. Therefore, fans at games can expect to feel more frustrated.

Out of the 20 Premier League stadiums, 18 will continue to show a “Checking…” graphic on big screens. Supporters at Anfield and Old Trafford must make do with a stadium announcement and smaller screen for text only. There seems no quick fix.

The Premier League could allow VAR incidents to be shown on big screens after a decision has been made. But do supporters want to look at them after play has resumed?

“I wouldn’t want them to constantly start looking at the screen,” said Swarbrick. “As we move forward, things might change, but we’ll see how we progress.”

Should fans get to listen in?

One solution would be to allow fans to listen to real-time communication between officials. It would require approval from IFAB, and PGMOL chief Mike Riley has previously told SSN it may happen by 2026.

“Yes, it could happen,” acknowledged Swarbrick. “Will it be beneficial? Potentially. The fact that people can listen to match officials’ decision-making and communication. I leave all that to IFAB.”

And therein lies the issue. Each competition is doing its best to implement changes in its own way. Laws are laws but they remain open to interpretation.

Ever the optimist, Swarbrick said: “We will get fairer and better judgements on decisions throughout the season. It might take fans a while to get used to it.”