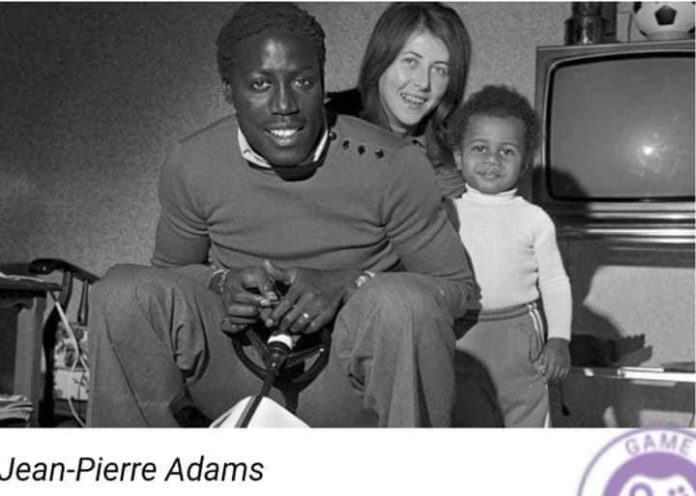 Jean-Pierre Adams (born 10 March 1948) is a French former footballer who played as a central defender.

Since 17th of March 1982, he has been in a coma following an operation.

Remarkably, his wife Bernadette, whom he married in 1969, is still by his side to this day.

When the surgery was conducted, he was 34 years old and is now 71.

Adams was born and raised in Dakar until the age of 10, when he left his native Senegal on a pilgrimage to Montargis in the Loiret department alongside his grandmother, who was a devout Catholic. When they arrived, she enlisted him at a local Catholic school, Saint-Louis de Montargis. He was adopted by a French couple shortly after his arrival.

During his studies, Adams worked at a local rubber manufacturer and he started playing football at several local clubs in the Loiret area.

Adams started playing with RC Fontainebleau in 1967 as a striker, with whom he won the Championnat de France amateur twice. In 1970, he signed a contract with Nîmes Olympique, going on to remain in Ligue 1 for the following nine seasons, also playing for OGC Nice and Paris Saint-Germain FC.

In the 1971–72 campaign, Adams contributed with four goals in all 38 games to help Nîmes to a best-ever second place, also winning the Cup of the Alps. He added a career-best nine in 1973–74, for a final ninth position.

After one year in Ligue 2 with FC Mulhouse, Adams retired in 1981 at the age of 33, following a spell with amateurs FC Chalon.

On 15 June 1972, Adams made his debut for the French national team in an unofficial exhibition game against an African XI selected by the Confederation of African Football. His first competitive cap came on 13 October of that year, in a 1–0 home win against the Soviet Union for the 1974 FIFA World Cup qualifiers.

Adams’ last appearance occurred on 1 September 1976, in a friendly with Denmark. During his tenure with Les Bleus, he formed a stopper partnership with Marius Trésor which was dubbed La garde noire (black guard).

Adams and his wife Bernadette were married in April 1969 and have two sons, Laurent (born 1969) and Frédéric (1976). Following a ligament rupture injury, he was hospitalised for surgery on 17 March 1982 at the Édouard Herriot Hospital in Lyon. After an error made by his anaesthetist, he suffered a bronchospasm which starved his brain of oxygen and he slipped into a coma.

In the mid 1990s, when a court of law adjudicated on the case, both the anesthetist and trainee were given one-month suspended sentences and fines that translated to a $815 fine.

Guardiola on his Man City table leaders: You never give up

‘We can do better’ – RTU Coach Shaibu Tanko fires warning to rivals despite...