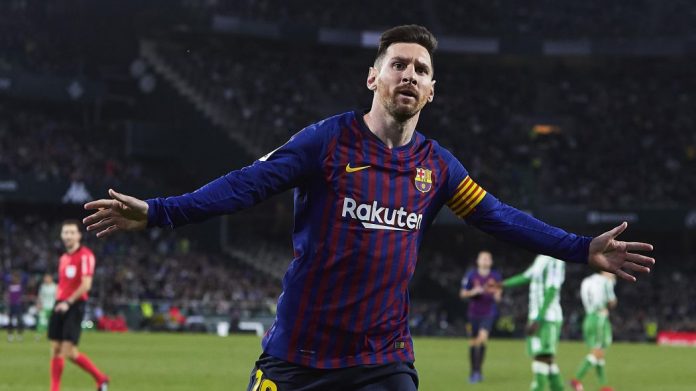 Lionel Messi netted yet another sensational hat-trick as Barcelona continued their seemingly unstoppable march towards the LaLiga title with a comprehensive 4-1 win over Real Betis.

All three goals in Messi’s 51st career treble were memorable, with a superb free-kick to open being followed by a clinical link-up with Luis Suarez before the Argentinian finished things off with a delightful dinked effort.

Suarez also got in on the act with a fine solo goal while Betis’ reply, from Loren, was also one for the highlights reel from a hugely entertaining encounter at the Benito Villamarin Stadium.

The result sees Barca extend their advantage over second-placed Atletico Madrid, who lost on Saturday, to 10 points, and keeps them firmly on course for a possible LaLiga, Champions League and Copa del Rey treble this season.

Betis were the last team to beat the Catalan giants in the league, stunning the Nou Camp with a 4-3 upset back in November, and they looked the more likely scorers in the early exchanges here.

Former Barca youngster Cristian Tello was denied by a last-ditch tackle when clean through before the stretching Jese Rodriquez was just unable to turn in Joaquin Sanchez’s cross.

However, the reigning Spanish champions weathered the storm and took the lead through a trademark Messi free-kick in the 18th minute.

Arthur Melo was brought down 25 yards out and Messi stepped up to curl an unstoppable shot into the top-right corner of Pau Lopez’s net.

Messi had a chance to repeat the feat from an almost identical position seven minutes later, but this time he went for the other corner and Lopez was able to save.

Eighth-placed Betis refused to buckle, though, and they caused more than a few problems for the Barca defence as they sought to level.

But it should have been 2-0 in the 40th minute, Messi teeing up the unmarked Suarez inside the box only for the Uruguayan to mishit his shot and allow Lopez to save.

The two South Americans combined brilliantly again in first-half stoppage time, but this time Lopez could do nothing as Messi made it 2-0.

Messi played a one-two with Suarez, whose clever back-heel put his team-mate through on goal, and the five-time Ballon d’Or winner lashed home his second of the night.

Barca, who play Valencia in the Copa del Rey final and face Manchester United for a place in the Champions League semi-finals, set about trying to increase their lead in the second half and Suarez missed two good chances around the hour.

However, Betis did not heed those warnings as, in the 63rd minute, Suarez did make it 3-0 when he escaped the attentions of three home defenders before coolly slotting past Lopez.