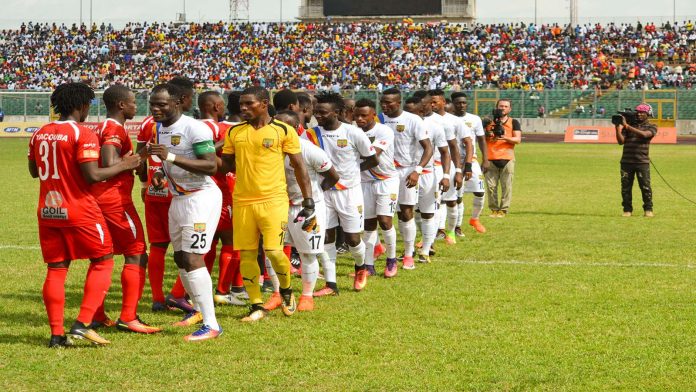 As the Ghana Special Competition enters matchday 10 on Wednesday, Asante Kotoko have no other wishes than a win for themselves and a Medeama slip-up in order to reclaim the first spot in Zone A.

Having relinquished the top position a week ago, the second-placed Porcupines – who were not in matchday nine action on Sunday – will recapture top spot with a home win to sixth-placed Bechem United if the Yellow and Mauves fall at home to Ashanti Gold, who are fourth on the table.

Currently two points apart, a Kotoko triumph and a Medeama draw, on the other hand, will see the new leaders determined by goal difference.

Elsewhere in the zone, Berekum Chelsea, who lost 2-1 to Ashanti Gold on Sunday, will seek to make amends with all three points when they host Eleven Wonders, whose 2-1 win over Medeama same day ensured that the Yellow and Mauves could not stretch their lead over Kotoko atop the table.

In Zone B, leaders Hearts of Oak will hope to make it four successive wins in their home tie against fifth-positioned Liberty Professionals at Accra Sports Stadium.

Karela United, only one point adrift of the Phobians, aim to keep up the chase with a win in their visit of Tema-based and bottom-placed Inter Allies.

At Sogakope, third-placed Wafa will want to get back to winning ways when they host second-from-bottom Dreams FC, following their humiliating 4-0 reversal to Hearts of Sunday.

In the final game, hosts Elmina Sharks will square off against sixth-positioned Ebusua Dwarf at Nduom Sports Stadium. Sharks, who have won three games thus far, occupy the fourth position.

JUST IN: Ronaldo arrives for sentencing in tax fraud case

‘Strength, Courage and Leadership’ – Ghana arrive in Doha for World Cup with a...