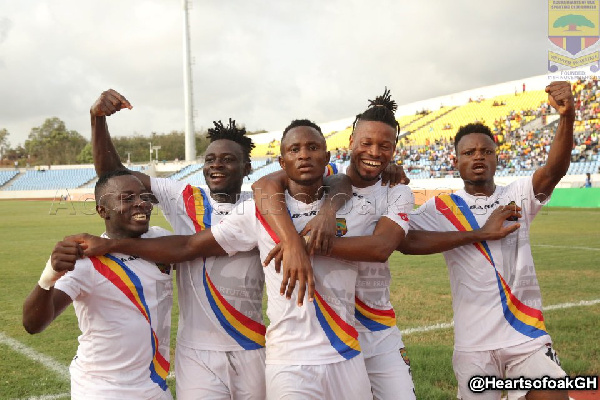 Hearts of Oak produced one of their best performances in recent times as they handed Wafa a 4-0 thrashing on Matchday Nine of the Ghana Special Competition on Sunday.

First half goals from Mitchell Sarpong and Mohammed Fatawu and second half strikes by Manaf Umar and substitute Kofi Kordzi handed the Phobians all three points at home at the Accra Sports Stadium.

Both teams were tied at the top of the table in Zone B ahead of the fixture. Hearts have moved on from standing second due to an inferior goal difference to becoming the new leaders on the log.

Karela United, one point adrift of Hearts and Wafa going into the matchday, have taken over second position following a 1-0 triumph over Elmina Sharks at Anyinase. Emmanuel Osei Baffour’s strike was the separating factor.

Wafa have dropped to third on the log, while Sharks still hold onto fourth spot as closest contenders Liberty Professionals could only manage a 0-0 away draw with second-from-bottom Dreams FC.

In Zone A, Medeama could not take advantage of the inactivity of second-placed Asante Kotoko to stretch their lead as they succumbed to a 2-1 away defeat to Techiman-based Eleven Wonders, who scored through Hardi Muhazu and Solomon Afriyie. Matthew Essiam’s goal for the Yellow and Mauves was just a consolation. Wonders stay in fifth position despite gaining three more points.

Third-placed Aduana Stars have closed in on Kotoko, reducing their points difference to two. The Fire Boys’ boost is a result of a 2-0 triumph over sixth-position side Bechem United, courtesy of goals from Yahaya Mohammed and Fataw Abdul-Rahman.

In the final game, hosts Ashanti Gold beat Berekum Chelsea 2-1 to register their third win of the season. Emmanuel Owusu and Richard Djodi were on target for The Miners, who still sit fourth on the log despite the victory, while Foster Ali Brimah netted the consolation for The Blues who are seventh on the table.

Ghana U-23 team escapes plane crash on their way to Gabon for AFCON second...

Neymar: When I needed support, Messi gave me a hand