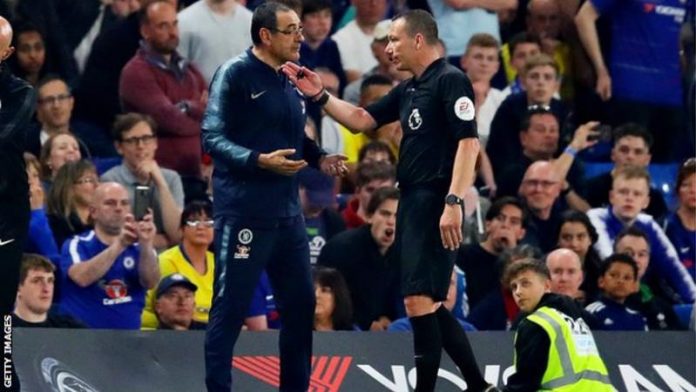 Chelsea boss Maurizio Sarri has been charged with misconduct after he was sent to the stands at the end of Monday’s 2-2 draw with Burnley.

Tensions boiled over at the end of the match at Stamford Bridge.

David Luiz and Ashley Barnes were involved in an altercation on the pitch and a scuffle took place near the tunnel entrance at the final whistle.

“I think there will be a follow-up on that. Maurizio felt very unhappy,” Zola said after the match.

“We understand it’s a football game. You say words because of the adrenaline, but he wasn’t particularly happy.”

Sarri did not take part in the post-match media conference and Zola said Chelsea were unhappy with Burnley’s time-wasting during the game.

The Italian, 60, has until 18:00 BST on Friday to respond to the Football Association charge.

UNCOVERED: The amazing commercial impact of Messi at PSG ‘we’ve run out of shirts to sell!’

Ghana DOL Zone 1: RTU climb to the top of Zone 1 after winning...