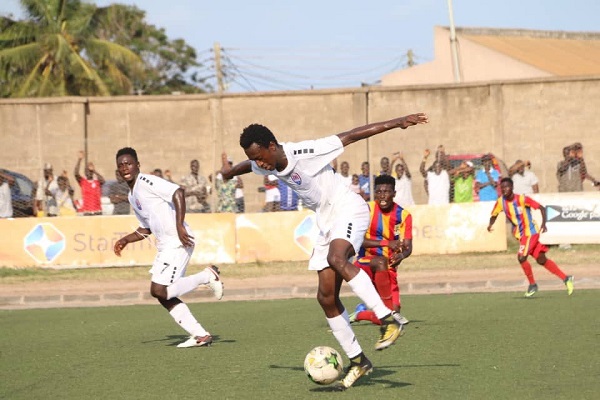 The last matches in the first round of the Ghana FA Normalization Special Cup comes off Wednesday, April 24.

Asante Kotoko return to action after resting on Sunday as they welcome Berekum Chelsea to the Baba Yara Stadium. The Porcupine Warriors lead the Zone A log with 10 points and a win could keep them there. The Porcupine Warriors currently have had star player Songne Yacouba back in training but may not be available for selection.

Berekum Chelsea – who beat AshantiGold 1-0 to record their first win – will be hoping to build on it. They lie six and a defeat may push them to the bottom.

Aduana Stars will play hosts to Medeama SC at the Nana Agyeman Badu II Park, Dormaa. Coach Tandoh’s charges are third on 8 points, one less than their opponents who occupy second – with one outstanding game. The contest is expected to be cagey as both sides are keen on a place that brightens their chances of Champions League football later in the year.

Bottom-placed Eleven Wonders will take on Bechem United at the Nkoranza Children’s Park. Wonders are on three points which were earned at home and would be fighting to secure another. A win for Adepah’s will see them move to 5th position if Berekum Chelsea fails in Kumasi. The Hunters, on the other hand, have lost all games on the road.

In Zone B, Hearts of Oak return to the Accra Sports Stadium to play struggling Inter Allies. The Phobians will strive to bounce back after the 3-2 defeat to WAFA over the weekend. Hearts occupy the 5th position with 9 points while Inter Allies lie second from bottom with 5 points. The Capelli boys have been impressive in terms of possession but have failed to translate it into winning matches.

Dreams FC also welcome impressive Elmina Sharks to the Dawu Park. The Still Believe boys have struggled to find their form as they have recorded only a win in six games. Sharks remain unbeaten and currently lie third with 10 points. Their goalkeeper, Attah Mensah has also kept six clean sheets, which gives Dreams a huge task to accomplish on Wednesday.

At the Crosby Awuah Memorial Park in Ainyinase, Karela United will battle second-placed Liberty Professionals. The hosts have picked all maximum points at home and with their sharp attack, comprising Diawise Taylor and Solomon Sarfo Taylor still intact, visiting Liberty will have a daunting task. A win for Karela will also see them overtake the Scientific Soccer Lads.

Elsewhere at the Cape Coast Stadium, Ebusua Dwarfs will lock horns with Premier B leaders WAFA. Dwarfs will be looking forward to build on the 1-0 victory they chalked away at Inter Allies in Tema Sunday. But they would have to pick their second win against the Academy Lads who have not suffered defeat in the competition.