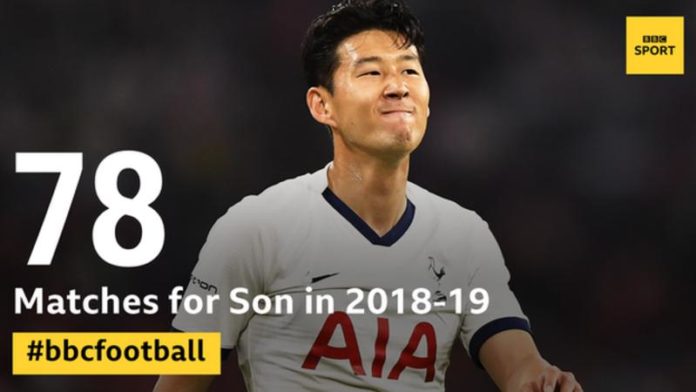 The health of top footballers is “at risk” according to a global players’ union, who have called for “mandatory offseason breaks of four weeks”.

Fifpro have collated data on 16 elite players and found some played almost 80 matches and travelled over 110,000km last season.

Tottenham’s Son Heung-min and Liverpool duo Alisson Becker and Sadio Mane were among the players analysed.

Fifpro said some players are struggling with “mental and physical strain”.

What did the Fifpro report say?

Fifpro represents 65,000 professional footballers from 63 national players’ associations. Their ‘The ‘At the Limit’ report compared the workload of 16 players over the last 12 months with medical science on health and performance capacity.

The report claims elite non-European players such as Mane, Alisson and Son are travelling too much without adequate rest when they leave club football for international duty.

Fifpro general secretary Theo van Seggelen said: “To meet the demands of the match calendar players are being repeatedly asked to play at their limit without sufficient rest and recovery. This means that they cannot perform at their best and, worse still, that some are struggling with sustained periods of mental and physical strain.

“Scientific research confirms that the health of top players is at risk because of today’s congested match schedule.”

So what do Fifpro want?

Fifpro also cite results from a 2018 survey conducted on 543 players and claim 85% were in favour of a mid-season break lasting 14 days.

The inclusion of such breaks forms part of seven recommendations they have as a result of the ‘At the Limit’ study.

The ongoing call for more rest

Liverpool manager Jurgen Klopp called on authorities to find a “better way” to handle player workload late in the 2018-19 season when the Champions League final was scheduled five days before international fixtures.

Klopp said: “If we don’t learn to deal with our players in a better way, competition-wise, then it’s the only chance to kill this wonderful game. Because without the players, it’s not a good one.”

This season, Premier League clubs will have one weekend off in February, a move the Football Association called “significant”.

As part of the ‘At the Limit’ study, Juventus’ Chiellini said: “For us to continuously play at our best and improve performance, we need to be protected from excessive match schedules.”

Former Manchester City defender Kompany added: “Put a cap on how much players can be used and you can play as many games as you want because the players will have compulsory amounts of rest.”