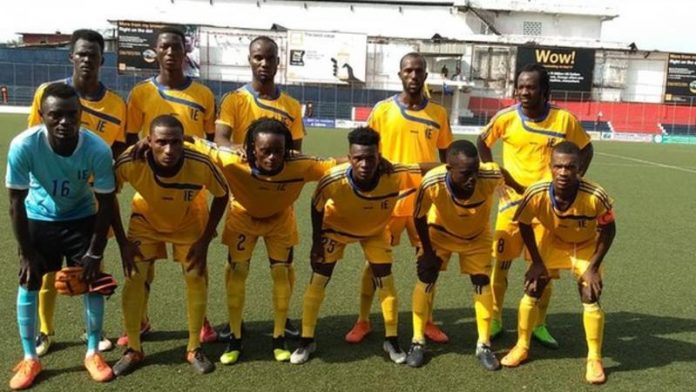 Liberia President George Weah’s former club Invincible Eleven has been relegated to the country’s third tier after failing to pay a fine of US$909.

The Liberia Football Association (LFA) imposed the sanction after the nations oldest club did not honour a league match on 6 April due to financial constraints.

LFA statutes say fines must be paid before the club’s next match and failure to do so could lead to “appropriate disciplinary actions, including fines, expulsion and relegation.”

The club looks like it will now have to wait until next season to play again as it is too late to integrate them into the Liberian third-tier.

The LFA decision also means that all eight of Invincible Eleven’s results in the league so far this year will be removed from the records.

Invincible Eleven, who have been Liberian champions 13 times since their foundation in 1943, have been experiencing financial problems for several years.

They were relegated from the top-flight at the end of the 2016-17 season, alongside another of Liberia’s biggest clubs Mighty Barolle, who also have 13 league titles.

Weah, who was named Fifa world player of the year in 1995, scored 24 goals in 23 games for Invincible Eleven as they won the title in 1987 season.

Meanwhile Junior Professionals, owned by General Prince Toe an aide to President Weah, have paid their fine of US$909 following their refusal to honour a league match.

Like Invincible Eleven they did not travel to face Nimba Kwado for their match which should have been played on 26 March.

EXCLUSIVE: RTU is demanding GHC 10,000 in compensation from the Normalisation Committee – RTU...