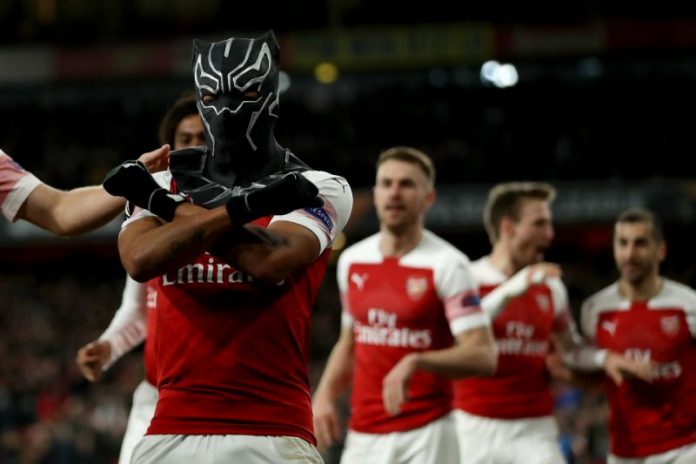 The Gunners booked their place in the quarter-finals with a 3-0 win but one of the main talking points of the match was Aubameyang’s creative celebration.

Pierre-Emerick Aubameyang has explained why he chose to sport a mask inspired from the Hollywood film Black Panther to celebrate his second goal during Arsenal’s Europa League triumph over Rennes.

The Gunners booked their place in the quarter-finals after overturning a 3-1 deficit from the first leg by winning 3-0 at the Emirates Stadium.

Arsenal raced to a 2-0 lead thanks to early goals from Aubameyang and Ainsley Maitland-Niles before the striker added the Gunners’ third in the 72nd minute to seal the victory.

Aubameyang’s celebration arguably took the shine off the goal though as he put on a mask from the 2018 film while his team-mates congratulated him.

And when asked about the reason behind the mask, the Gabon international said it represented him and tied in with the nickname of his national team, the Panthers.

He said: “I needed a mask which represents me and that’s the Black Panther. In Gabon we call the national team the Panthers.”

Unai Emery’s men were the better team but were guilty of missing a few chances which gave their French opponents hope of taking the game into extra-time.

And Aubameyang admitted he could have been more clinical in the game, adding: “I missed two chances to close the game but the most important thing is that we won and everybody is happy and proud.

“Rennes were a bit nervous and angry as well but that’s football sometimes and it can happen like that.”

‘This is a day to forget but we have to focus on next game’...