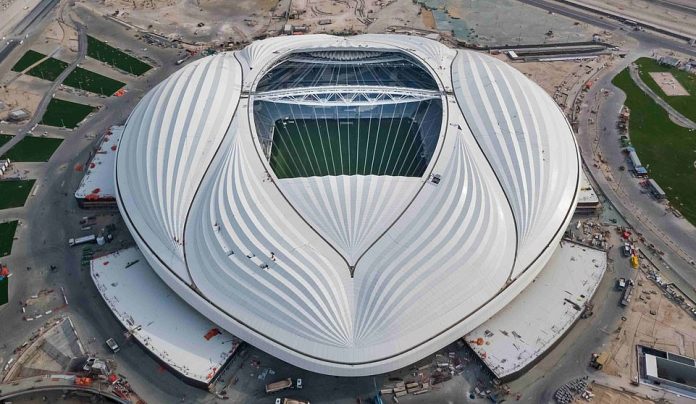 A World Cup 2022 venue dubbed the ‘vagina stadium’ has been unveiled after becoming the first to be completed from scratch ahead of the tournament.

The Al Wakrah stadium will host matches up to the quarter-finals and contains innovative cooling technology to bring temperatures down for the 40,000 fans.

It was designed by the late British-Iraqi architect, Dame Zaha Hadid, who died suddenly of a heart attack in 2016, aged 65.

When her plans were first released in 2013 they were said to have been inspired by the flowing shape of a dhow boat, a traditional Arabian pearl diving and fishing vessel.

The drawings were topped with a structure resembling the sails of a show. But the images went viral with commentators suggesting the stadium looked more like a woman’s private parts.

At the time Dame Zaha was angry at the comparison, saying: “It’s really embarrassing they come up with nonsense stuff like this. What are they saying? Everything with a hole in it is a vagina? That’s ridiculous.”

Iraqi-born Hadid -– whose other works included the Aquatics Centre at the 2012 London Olympics, the MAXXI Museum in Italy and the Guangzhou Opera House in China — added: “If a guy had done this project there wouldn’t have been the same level of criticism”.

As well as the shape of the stadium, which is 12 miles south of the capital, Doha, being designed to keep out the desert heat, Al Wakrah will also use a revolutionary new air-conditioning technology to bring temperatures down to around 72F for fans and players.

This is done by piping cold air through 100 ventilation units into the stadium, which has a 92m retractable roof to provide shade to the pitch.

The tournament has already been moved to the winter months to avoid the searing summer temperatures in the Gulf.

As part of the tournament’s legacy, when the World Cup is over, the top tier of the stadium will be dismantled and shipped to the developing world.

In its promotional material, Aecom, the firm that won the Al-Wakrah contract with Zaha Hadid Architects, said of the designs: “Inspired by the dhow boat that carried generations of local fishermen and pearl divers, the stadium weaves together Qatar’s past with it progressive vision for the future.”

Qatar is producing eight stadiums for a 32-team World Cup, although FIFA boss Gianni Infantino has said he would like to expand the tournament to 48 teams, which would involve Doha co-hosting with an Arab neighbour.

The Khalifa International Stadium, which was built in 1976, has already been unveiled for the tournament following redevelopment.