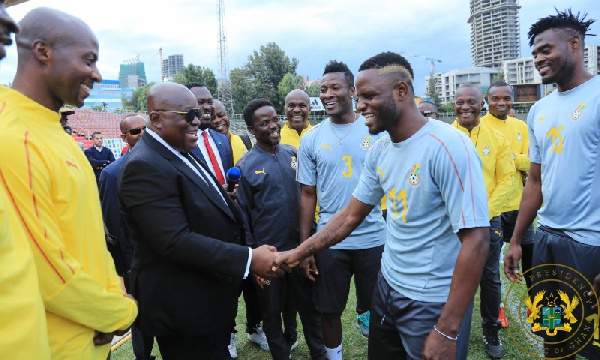 President Nana Addo Dankwa Akufo-Addo has made a passionate appeal to the Ghana Black Stars to respect the authority of the national team coach, Kwesi Appiah and the team captain, Dede Ayew.

Speaking during a meeting with the national team, as well as the management and technical teams of the Ghana Black Stars at the banquet hall of the Jubilee House, President Akufo-Addo said the only way to cement the team spirit of the Black Stars is to, without any shadow of reservation, respect at all times the direction given by the Coach and the duly appointed captain.

“You have to respect unreservedly, the authority of the coach and the authority of the captain, that is basic rules, non-negotiable rules; if you don’t do it, everybody will be going their separate ways. If you do that you cement the team work and you will become a cohesive forceful force”, the President said.

The President expressed great faith in the players of the Ghana Black Stars stating that he has no doubt that they are amongst the best players on the continent of Africa and among some of the best players in the world.

Teamwork, President Akufo-Addo said: “Is at the heart of success in football as it is in virtually every enterprise. Without it, you can’t succeed. To this end, he urged the players “to work for each other on the field of play”.

“Helping each other to win the trophy, that is the team work we are looking at”.

“So, your slogan, that is the slogan of the year, ‘the year of return’, this, indeed, is the year of return”, of Ghana’s 2019 Afcon campaign which is to bring the trophy to Ghana after going trophy-less for the last 37 years.

President Akufo-Addo indicated that he is planning to travel to Egypt to watch the first match of the team and hopefully the final match with the Black Stars featuring.

The Chairman of the Black Stars Management Committee Chairman, Dr K. K. Sarpong, in a brief address, said the team is united and ready to go and battle it out to win the Afcon this year.

“I believe we have been given enough resources and it is up to us, the Management Committee, the Technical Committee and the players to do battle and bring honours to this country”, Mr Sarpong said.

The Captain of the Black Stars, Dede Ayew, described the upcoming Afcon as a difficult task ahead of the team, but said: “We are ready”.

“We are going to Dubai to prepare, to work very hard and we know that only victory makes our people smile, so, we are going to make sure that we bring victory to our country”, the Black Star’s skipper said.

The team is scheduled to depart the shores of Accra on Saturday, 1 June 2019 to Dubai, in the United Arab Emirates for the final phase of their preparation for the tournament.

JUST IN: The GFA Match Review Committee announces decisions on RTU vs Nkoranza Warriors and three other Division One League matches