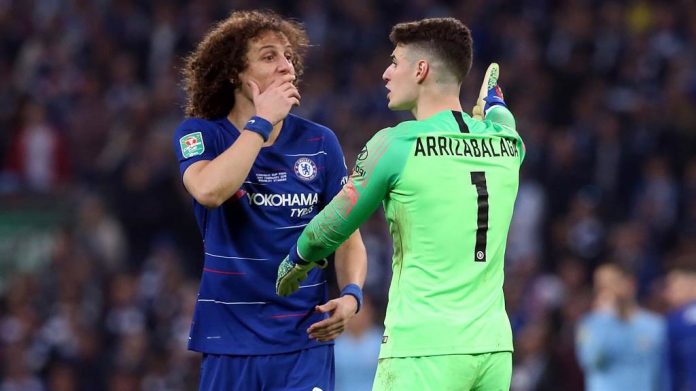 Blues number one Kepa was accused of humiliating, disrespecting and undermining his manager when refusing to be substituted during the Wembley clash.

Kepa had been struggling with cramp and, with the game still locked at 0-0 and approaching a penalty shoot-out, Sarri was ready to replace him with number two Willy Caballero.

But the rebellious Spaniard refused to leave the pitch, insisting he was fit to continue, which sparked a furious reaction from Sarri on the sidelines.

The manager has since dismissed the entire episode as ‘a big misunderstanding’.

Chelsea defender David Luiz went to speak with Kepa and is said to have told his frustrated team-mate to respect Sarri’s decision, but it was apparently not enough to get the goalkeeper to leave the field.

But former midfielder Ballack believes the rest of Chelsea’s players should have stepped in and forced Kepa to comply with his manager’s wishes, saying the whole episode ‘was not a good picture’ for the club.

“It was surprise, I’ve never seen anything like that before,” the German said on Monday’s Alan Brazil Sports Breakfast.

“When your number is shown, you must respect the manager’s decision.

“I was a bit surprised by the reaction of the team. Normally if a team-mate is not leaving the pitch and is frustrated for a certain reason, and obviously this was a really important reason to make a quick sub just before the penalties, you go over and you try to speak with him to get him to follow the instructions.

“But David, I don’t what he was saying to him, but he’s a key player in that team and he’s a leader, so it surprises me.

“It was a not a good picture for Chelsea.

“The board has to say something because it’s really, really important the players respect the coach and respect each other and something shouldn’t happen like that.

“It was a shame, because they played a good game against a really strong team and they deserved something, but now we’re all talking about something like this.”

Arsenal 3-2 Liverpool: Saka at the double as Arsenal show title credentials with victory...