Liverpool welcome Manchester United to Anfield on Sunday in a huge top-of-the-table clash. Jurgen Klopp’s reigning champions find themselves in second place, overtaken by their in-form rivals. Ole Gunnar Solskjaer appears to have found an effective system, but this weekend’s game will be a significant examination of his side’s title credentials. Here, This is an in-depth preview of the game.

Liverpool look set to be without their primary central defensive options of Virgil van Dijk, Joel Matip and Joe Gomez this weekend, meaning natural midfielders Fabinho and Jordan Henderson may deputise at centre-back once again. The pair, who started together in the 1-0 defeat to Southampton, represent a weak spot Solskjaer will surely want his side to test.

But Klopp’s men have been equally hamstrung by a profligate attack. Since thrashing Crystal Palace, they have scored just one goal in three games, one of which came against the weakest defence in the league in West Bromwich Albion. With a shaky back line and lacking their usual ruthlessness in front of goal, Liverpool have been in poor form, picking up just eight points from their last five games.

Manchester United‘s form, on the other hand, has been exceptional. They have won four and drawn one of their last five in their surge to the top of the table, overcoming a variety of difficult opposition in the process. They also have no major injury concerns, which has allowed them to field a reasonably consistent team of late.

Solskjaer’s big question will be what midfield he lines up with. Paul Pogba and Nemanja Matic are his preferred creator-destroyer combo, but in tough games he likes to drop Matic, shift Pogba to the left wing, and introduce a more dynamic and cynical double pivot of Fred and Scott McTominay for the purposes of breaking up attacks and tactical fouling to stop counters.

As the form team going in, it’s worth assessing what Manchester United bring to the table this Sunday. Their build-up play is quite straightforward – they don’t play through the lines a lot, instead going wide to the full-backs before coming back inside through one of the front four. Bruno Fernandes is the usual linkman, moving laterally to connect attacks and play through balls or crosses from deep.

United’s build-up play is more effective with Edinson Cavani in the striker position atop their 4-2-3-1. The Uruguayan doesn’t always start these types of game due to Solskjaer’s preference for pacey counter-attacking, but – while he lacks the speed of Anthony Martial – Cavani does protect the ball better with his back to goal and varies his movement well, sometimes going long and sometimes coming short.

Solskjaer may go with a Fernandes-Cavani double act to keep Liverpool guessing, sacrificing Martial altogether or simply moving him to the wing. He could still opt for a counter-attacking strategy this way, with Marcus Rashford providing the speed and runs behind, while Fernandes poses a constant threat in transition with his ability to find space. 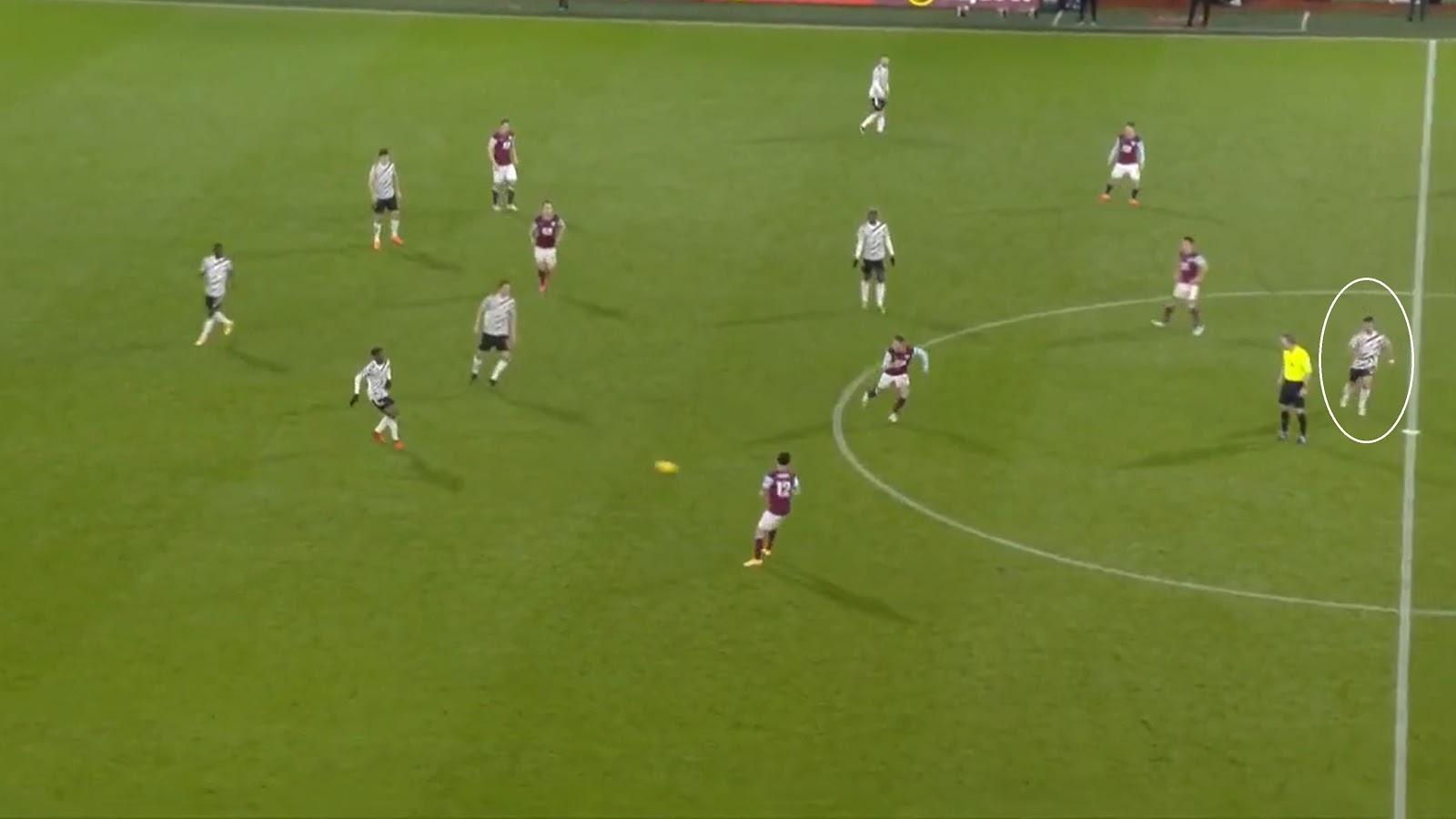 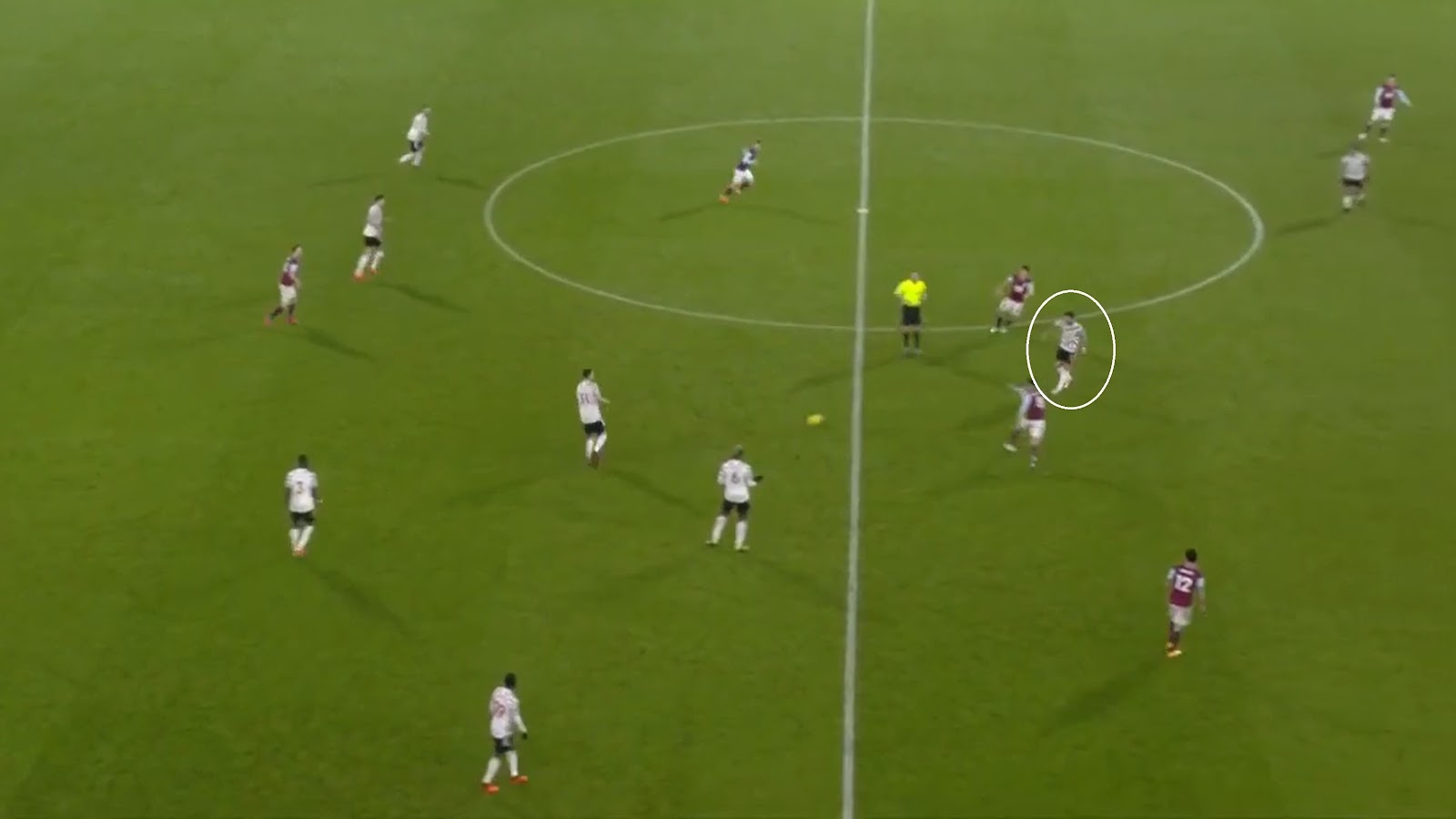 Starting Cavani would also offer Manchester United more of a threat on crosses into the penalty box. He is excellent in the air and could cause serious problems to Liverpool‘s makeshift centre-back pairing of Fabinho and Henderson in these situations. Without him, United simply do not have a natural finisher, nor anybody to attack balls in.

However, Rashford is arguably the biggest threat to Liverpool‘s defence this weekend. Having moved to the right-hand side recently, he consistently gets in behind last lines with well-timed runs. Even if the opponent sees this coming, he’s difficult to track because of his pace, giving United the outlet of diagonal balls from deep over the top for him to run onto. Liverpool‘s offside trap has been susceptible throughout most of this campaign, and Rashford is exactly the sort of player who can expose this weakness.

Liverpool‘s full-backs struggled in build-up situations in the recent defeat to Southampton. The Saints’ front two blocked the centre, forcing Henderson and Fabinho to pass wide to Trent Alexander-Arnold and Andrew Robertson, who frequently gave up possession when put under pressure. Fortunately for them, they are unlikely to come under the same scrutiny against a Manchester United side whose pressing – or lack thereof – is a weakness.

Alexander-Arnold and Robertson should get more time on the ball this Sunday, and will continue to pose serious problems in the final third. The former is one of the finest crossers of the ball in the country, serving up quality balls for the likes of Roberto Firmino and Georginio Wijnaldum to attack. Robertson can put in a mean cross too, while also threatening more with third-man runs to get to the by-line and cut back for Sadio Mane, Firmino and Mohamed Salah.

The quandary for Liverpool on Sunday will be that, while they are likely to have the lion’s share of possession, a press-and-counter approach could suit them better. Klopp may therefore want his men to play a bit more directly in the knowledge that losing the ball gives his side a chance to press. And they would be pressing an opponent that doesn’t always handle pressure well – as was seen in United’s 6-1 home defeat to Tottenham.

Liverpool‘s front three are highly intelligent when it comes to knowing when to step up and press, and how to angle their run. Below we see an example from the Southampton game. Firstly, Firmino steps up while blocking the pass into midfield. 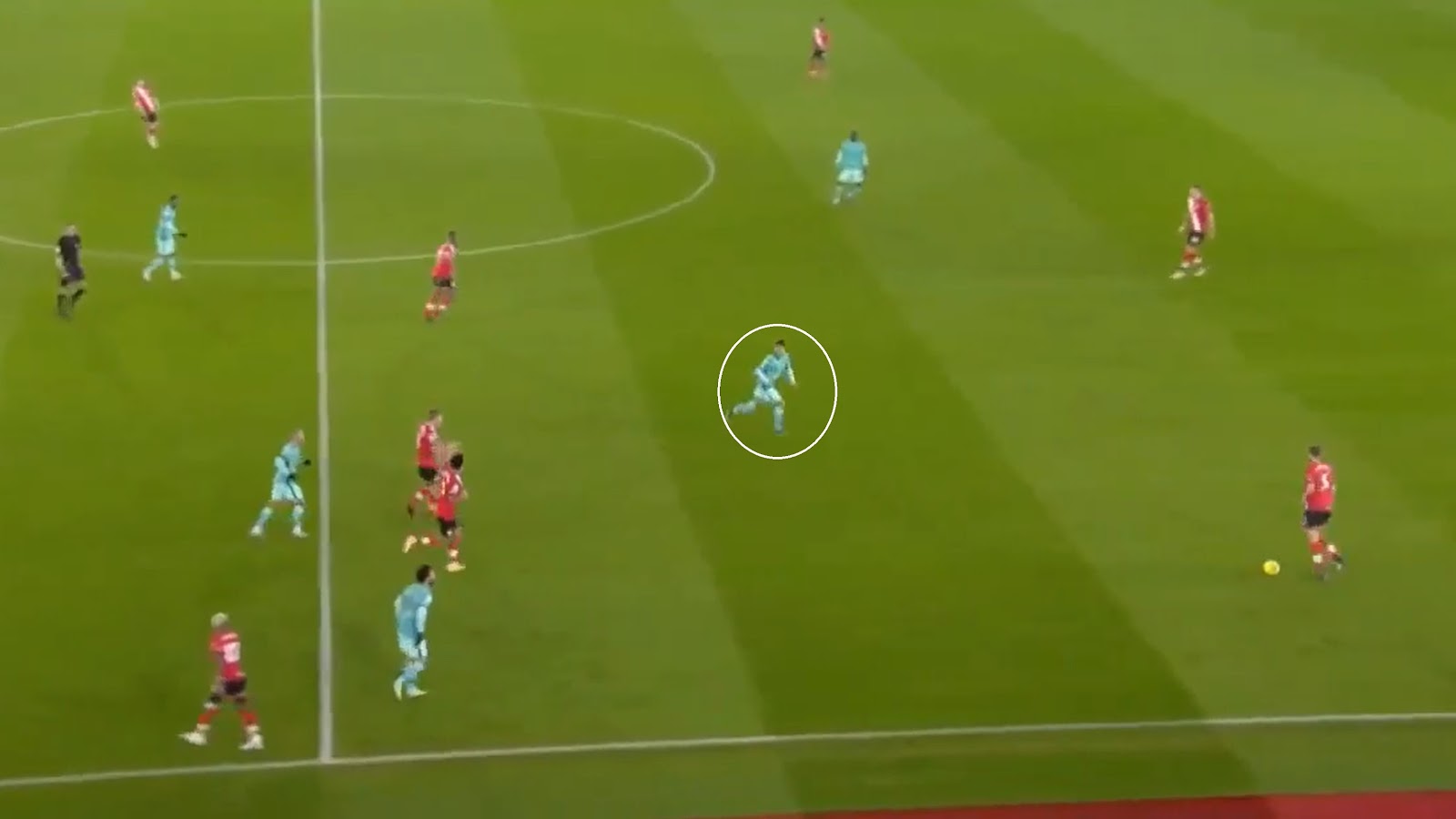 This forces a sideways pass, which sees Mane press the receiver while the midfielders step up to mark their direct opponents. Firmino also adjusts position to cut off the pass out to the full-back. Southampton now have nowhere to go but long, and cough up possession in the process. 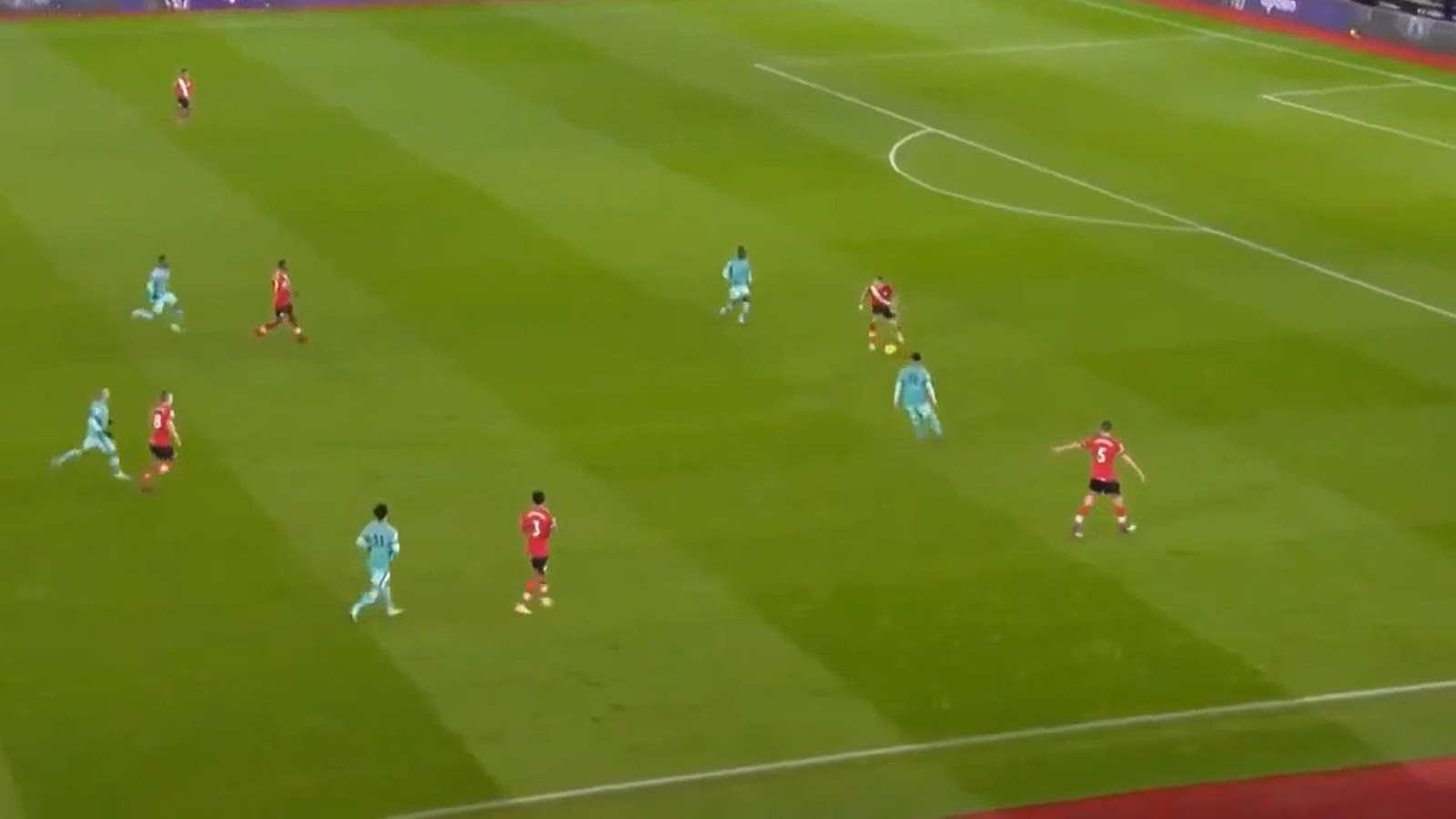 Liverpool have struggled to create in recent matches, and they also know Manchester United are at their best when counter-attacking. With this in mind, Liverpool may attempt a more defensive strategy than usual so they can press, force turnovers in midfield, then put Mane and Salah in positions where their one-versus-one ability could cause issues for the likes of Harry Maguire and Eric Bailly.

OPINION: Stop political interference in the affairs of Black Stars –...

Sports24online - July 18, 2019 0
The Head of Sports here at Zaa Radio, Halid Prince Mukadi Gbramoni has called for among other things, the de-politicization of the sports sector...

Arsenal fan suggests 5 ways to keep your mental health amid...