Inevitably the opening rounds of a new campaign are scrutinized with an undeserving zeal, conclusions drawn and crises uncovered long before the sample size is large enough for reliable analysis of the season to come. This is especially true for faltering giants like Manchester City, at a fascinating crossroads as we enter Pep Guardiola’s fifth season in charge at the Etihad.

And so we scour City’s opener at Wolves on Monday night as if a single game could unfurl the secrets of what 2020/21 will have in store, as if Grecian tragedy or rising phoenix could ever be writ large across a sticky 90 minutes at Molineaux – the scene of dropped points in 19/20, but also in the club’s title winning 18/19.

Yet the temptation is too great to completely ignore. After all, what unfolded in City’s 3-1 win on Monday evening was teeming with the knife-edge energy that lingers nervously over the Etihad following Liverpool’s phenomenal performance last season. This was a game of control, then unsettling disorder; of elegant moves, then clumsy movement.

For the opening 45 minutes Man City managed to play with a swaggering sense of self that suggested the difficulties of last year were behind them. Phil Foden’s goal, the second of the night and pure Guardiola in its aesthetic simplicity, appeared to show he can bear the weight of being labelled the heir apparent to David Silva.

He started on the right wing of a 4-2-3-1 but more often than not drifted infield to become a second number ten alongside Kevin de Bruyne, a twist on the old Guardiola tactic from the 17/18 centurion season. It worked so well precisely because Foden arrived late, and unseen, with Wolves’ unusual 5-3-2 formation unable to cover the gaps. With winger Pedro Neto being played out of position on the left of a midfield three, Foden was able to dip inside and dominate, receiving passes on the blind side of a static central midfield that couldn’t quite find its balance in the first half. 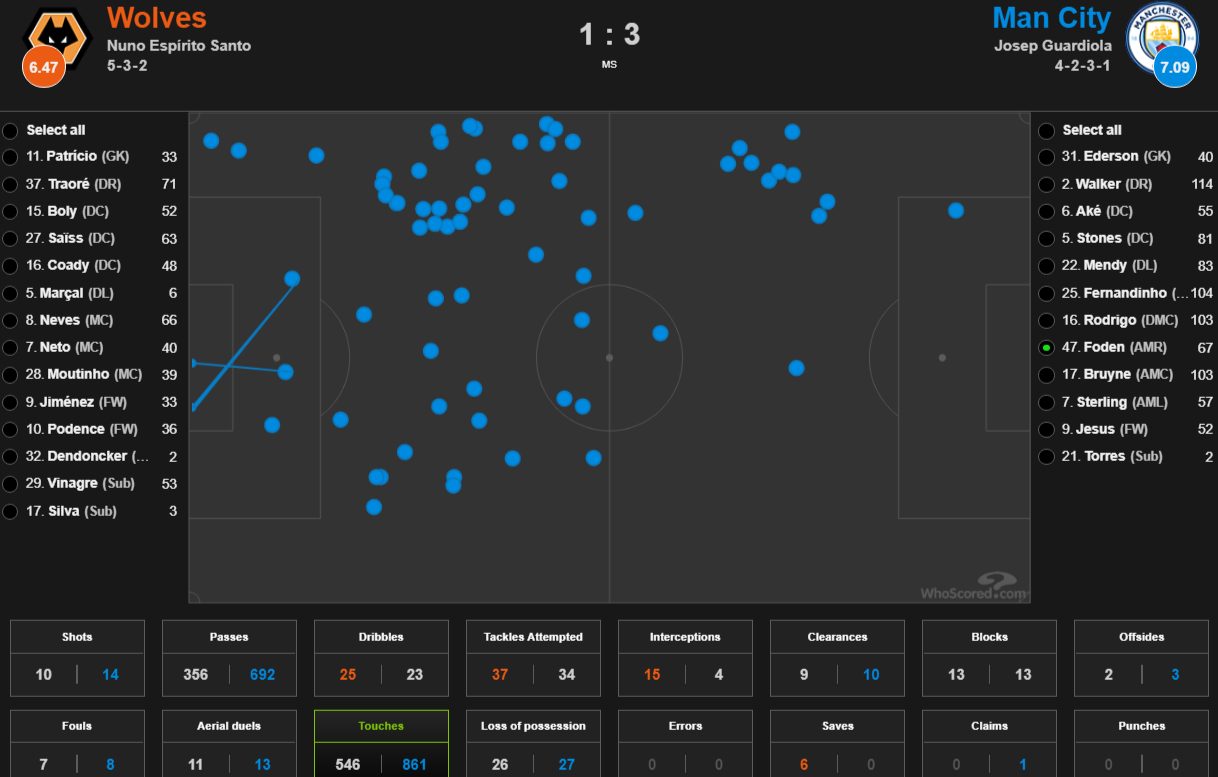 At this juncture City were cruising and looked destined for a simple win of the sort to kick-start a significantly more assertive title challenge this time around. Wolves were being kept at arms’ length, unable to counter-attack with any real conviction thanks to the visitors’ control of possession. They were assisted by Wolves’ slow start, of course, characterised by the sleepy challenge of Romain Saiss that handed City their opener on a plate.

But Wolves woke up in the second half, and suddenly the old worries returned for Guardiola and City.

Throughout the two years Man City were the best team in England they never once looked like losing a game, never once dropped the tenacity of their high press or lost control of proceedings. At Molineaux, as in so many games last season, City suddenly looked passive; an edge, a tactical awareness, a ferocity missing in compressing space between the lines and muscling out opposition counter-attacks.

Some of this can be put down to fatigue, given that their 19/20 season only ended five weeks ago, and like Manchester United in their defeat to Crystal Palace, City can anticipate a sharpness returning in the month ahead.

But some of this is a personnel issue. John Stones again struggled to assert himself, showing hesitancy in his movements and tracking that led directly to Raul Jimenez’s goal and put his team-mates at risk on a couple more occasions in the second period. A 35-year-old Fernandinho looked very much his age in the middle, too, and given that Rodri still lacks the bite of the Brazilian that made for an apathetic central midfield. 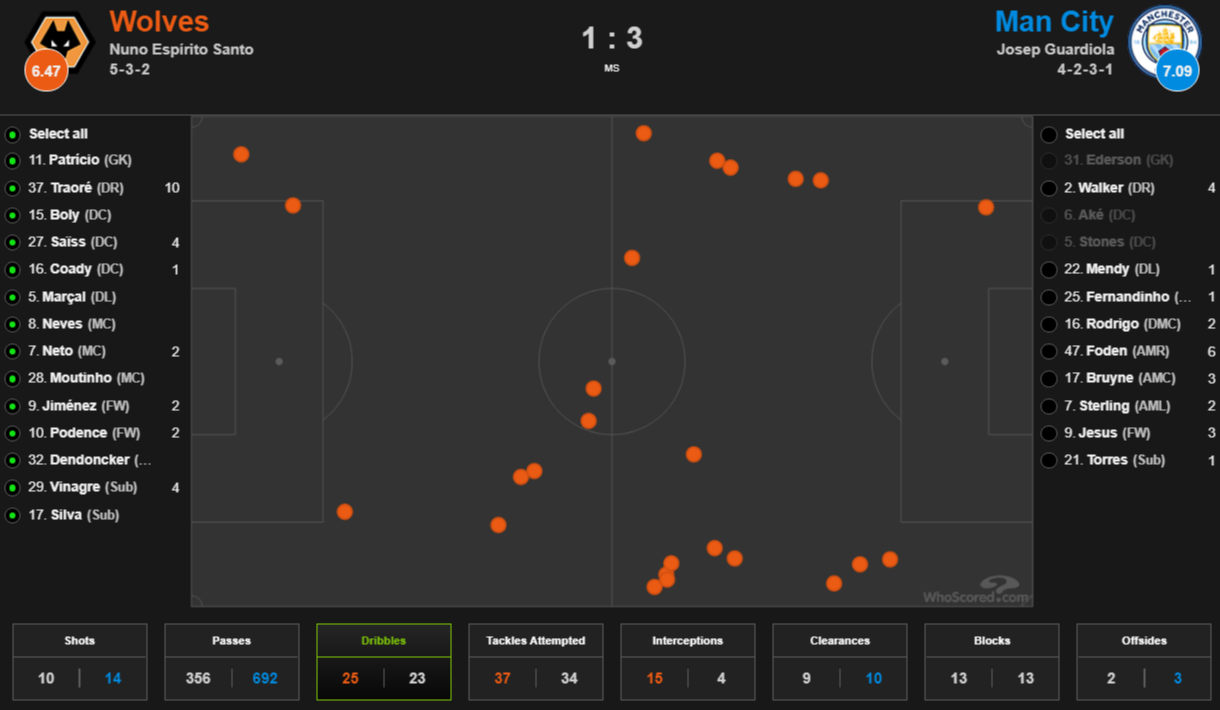 Elsewhere Benjamin Mendy still looks incapable of reinstalling order to Guardiola’s intricate patterns, and, glancing at the bench, Man City lack depth where once the riches were an embarrassment for the rest of the division. And so as Daniel Podence caused havoc down the right, leading typical Wolves breaks without anywhere near enough pressure being applied to his runs, one was left with the distinct impression that something intangible has been lost.

Man City lack the venom that made them an irrepressible force, lack the coherence in their off-the-ball tactical shape to suggest they have patched up the flaws in their defensive transitions. Last year, far too many Premier League opponents hurt them on the counter, partly because City’s defenders weren’t good enough to win their battles but partly because, without Fernandinho quietly dominating, they could not stamp out the threat at source, either.

Is this happening again? Any analysis of the tactical issues that lie ahead for Man City must be noted with caution. One game of football cannot contain within it all the answers of the coming season. More than that, a 3-1 win at Wolves is a very good result and a marked improvement on last year.

But nevertheless there was something uneasily predictable that should make City supporters a little bit nervous. To topple Liverpool will require perfection. Wobbling at Molineaux, allowing opponents back into a game at 2-0 thanks to familiar defensive vulnerabilities, is undoubtedly a bad sign. Man City’s campaign remains on a knife edge.

Juventus plan to use Ronaldo in €400M push for PSG star...

Sports24online - October 20, 2020 0
Juventus are prepared to use Cristiano Ronaldo in their bid for PSG star Kylian Mbappe. Mbappe, after refusing to consider new contract talks, is expected...

Enemies Within GFA Sponsored Anas Exposé To Destroy Me – Kwesi...

Egypt draw up preliminary list of 40 players for Kenya and...