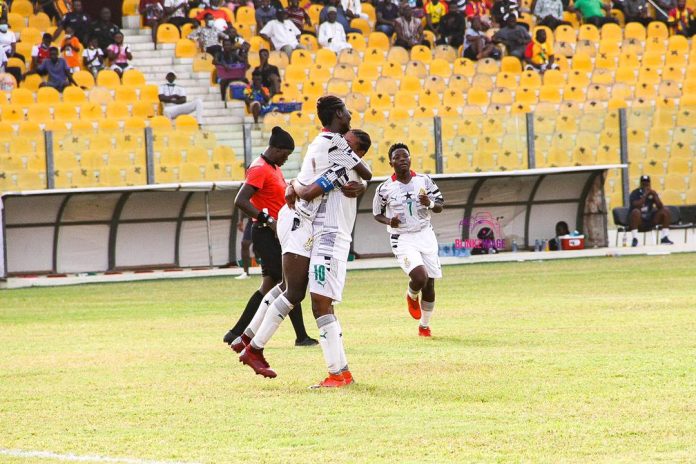 Two Tamale-based players, Georgina Ayisha Aoyem and Abdulai Karima were on the scoresheet for Ghana Under 17 women’s team the black Maidens yesterday at the Accra sports stadium after beating their Senegalese counterparts three goals to nil.

The Black Maidens were inspired by captain Georgina Ayisha Aoyem who scored the first goal as she capitalized on a counter attack to niche home the opener for Ghana on the 49th minute.

After hitting the crossbar with a powerful effort, Princess Owusu then neatly placed the rebound at the bottom corner of the post to register the second goal in the 58th minute mark.

Though Ghana’s Princess Owusu was given the marching orders after a bad tackle on Senegal midfielder Ndeye Tida, with just a few minutes to end the game, the Black Maidens added to the tally through FC Savannah striker Abdulai Karima as she slotted home calmly to complete the 3-0 thumping.

Ghana’s Black Maidens have qualified to the next stage of the FIFA U-17 Women’s World Cup qualifiers after beating Senegal 3-0 to qualify on a 4:0 aggregate score.

‘’I knew my opponents were not going to be a walk over so I was not surprised we played the first half without getting a goal. These days Women football is played everywhere and you cannot underrate any team and we can only thank God for the win’’ Coach Baba Nuhu said in a post-match presser.

”We will work on our missed chances and get things right in our next matches he added.

The win puts the Black Maidens up against Guinea in the next round of the qualifiers.