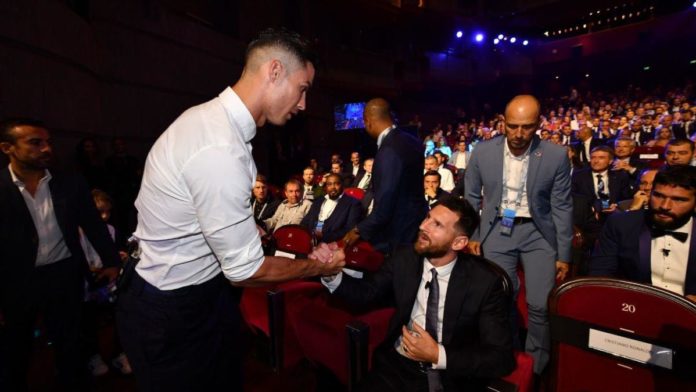 But when you get two of the greatest players ever – Lionel Messi and Cristiano Ronaldo – agreeing to break bread over dinner and a philosophical monologue from Eric Cantona, it turns into an entirely different occasion.

There were clear pangs of absence making the heart grow fonder between Juventus forward Ronaldo and Barcelona’s Messi as they shared jokes and laughs sat next to each other.

It was almost difficult to imagine that the two were such great rivals during Ronaldo’s nine years at Real Madrid and in the last decade of Ballon d’Or voting for the world’s greatest player.

“We have shared the stage 15 years. I don’t know if that’s happened before – the same two guys on the same stage all the time,” Ronaldo said.

“Of course, we have a good relationship. We haven’t had dinner together yet, but I hope in the future.

“We had that battle in Spain. I pushed him and he pushed me as well. So it’s good to be part of the history of football.”

With touching shows of affection like this, who would dare suggest that the pair do not get on?

If that impromptu display of nostalgia wasn’t enough, Cantona’s musings were something else.

The former Manchester Untied and France striker was speaking before the 2019-20 Champions League draw in Monaco, when he was given the Uefa president’s award.

Dressed in a flat cap and a red shirt, he began by quoting Shakespeare’s King Lear, saying “as flies to wanton boys we are for the gods” before continuing to reference science, war and crime.

The audience, packed with football superstars, watched in stunned silence before sharing puzzled glances as Cantona made his way from the stage before Lucy Bronze and Virgil van Dijk were later named Uefa’s players of the year.

Cantona isn’t new to philosophical outpourings. In the aftermath of his kung-fu kick on a Crystal Palace fan in 1995, he gave his infamous press conference observation that “when the seagulls follow the trawler, it’s because they think sardines will be thrown into the sea”.

“As flies to wanton boys we are for the gods, they kill us for their sport.

“I love football. Thank you.”

Ghana Black Stars: AFCON U-20 Player of the tournament Abdul Fatawu, two others get...