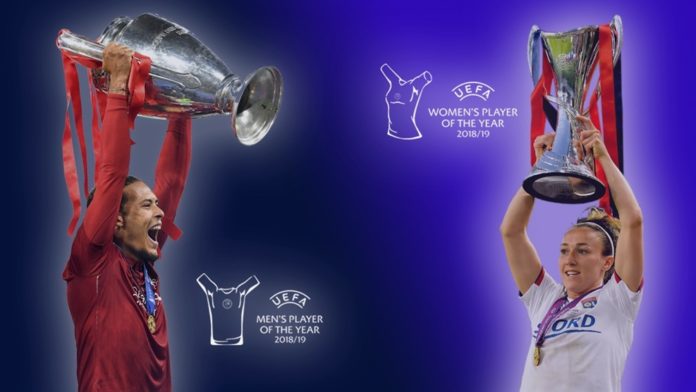 England’s Lucy Bronze has been named the Uefa Women’s Player of the Year, with Liverpool’s Virgil van Dijk taking the men’s award.

She is the first English winner of the honour, voted for by top coaches in the women’s game and journalists.

The 28-year-old edged out Barcelona’s Lionel Messi and Juventus’ Cristiano Ronaldo for the prestigious prize.

He is the first defender to win the award, which was first presented in 2010-11. Messi and Ronaldo claimed five of the previous eight awards between them, with Andres Iniesta (2012), Franck Ribery (2013) and Luka Modric (2018) completing the winners’ list.

A revelation for Liverpool since joining from Southampton in January 2018 in a £75m deal, Netherlands centre-back Van Dijk was an integral part of the side that won European football’s top prize last season and pushed eventual Premier League champions Manchester City all the way in the title race.

“I’m very proud to get this trophy. It’s credit to everyone who has helped me,” said Van Dijk, who won the Professional Footballers’ Association Player of the Year award and BBC Sport website’s player of the year for 2018-19.

“I need to thank my team-mates, without them I would not have achieved what I have achieved. It’s been a long road and it’s part of my journey.”

Bronze helped Phil Neville’s England reach the semi-finals of the Women’s World Cup in France in the summer. In doing so, she won the Silver Ball as the tournament’s second-best player.

She was unable to attend Thursday’s awards ceremony in Monaco, which followed the draw for the 2019-20 Champions League group stage, as she was appearing for England against Belgium in a friendly in Leuven.

But in a video message, Bronze said: “I’m ecstatic and super-humbled to have won the award up against two fantastic players who I know really well at Lyon.

“I want to say a huge thanks to the Lionesses, the England team. We had a great summer and I don’t think I would have won this award if it wasn’t for them.

“The same goes for the Lyon team. We had an amazing season, we won the treble. I think any one of those girls could have been up here receiving this award.”

The former Sunderland, Everton, Liverpool and Manchester City player – who joined Lyon in 2017 – scored one of the goals of this summer’s World Cup in England’s 3-0 quarter-final win against Norway.

Spanish football expert Guillem Balague on BBC Radio 5 Live: “Van Dijk deserves it, he has been a breath of fresh air in so many ways. Not just in the way he plays but how he acts too. He is a leader but without having to shout. He is a centre-back that does not need to tackle.

“He is somebody that has changed, seeing the statistics and results, the way Liverpool defend. He is the ultimate modern centre-back.

“I am glad for him. I really like him and when I spoke to him last season he showed the coolness off the pitch that he has on it. Perhaps we are seeing the end of an era too because I don’t know how many times we will see Cristiano Ronaldo and Lionel Messi as top three in Europe again.”

Italian football expert Mina Rzouki: “There is no argument about it. Defenders tend to make the difference in teams and sometimes they do not get recognised for it. Van Dijk transformed Liverpool in so many ways and his assuredness gave them the platform to play their attacking football.

“He is so strong at the back and he has made such a difference from how the side were before to how they are now. Liverpool are brilliant a lot of the time because of him.”

German football expert Raphael Honigstein: “Van Dijk deserves it because he is the symbol of the team. He is the captain without the armband and won the award as the figurehead and personality. He was one of the outstanding performers in European football.”