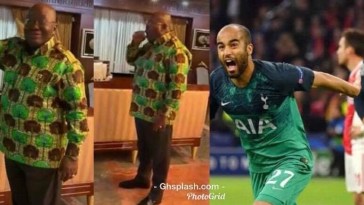 Ghana’s President Nana Akufo-Addo was one of the many hopeful Tottenham Hotspur fans praying for their team to beat Ajax to make it to the UEFA Champions League final.

Following Spurs late and stunning comeback win against the Dutch side, Tottenham fans all over the world have been celebrating.

And President Akufo-Addo who is a big fan of the English side was not left out. He could not contain his joy.

A video on social media showed the Ghana President shouting in a jubilant mood.

President Akufo-Addo is on record to have revealed that his support for Spurs began during the days of the all-conquering double-winning side in the 1960s.

“It was from my childhood in England. I saw the great double side, the side of Danny Blanchflower, Johnny White and Duncan McNair. It was a great football side; they won my heart from there,” Akufo-Addo said on revealed.

Tottenham were the first club in the 20th century to achieve the League and FA Cup Double, winning both competitions in the 1960–61 season.

After successfully defending the FA Cup in 1962, in 1963 they became the first British club to win a UEFA club competition – the European Cup Winners’ Cup. In 1967, Spurs won the FA Cup for a third time in the 1960s.

Barcelona In the 1970s Tottenham won the League Cup on two occasions and were the inaugural winner of the UEFA Cup in 1972, becoming the first British club to win two different major European trophies.

In the 1980s Spurs won several trophies: the FA Cup twice, FA Community Shield and the UEFA Cup in 1984.

Agyemang Badu diagnosed with blood clot in the lungs