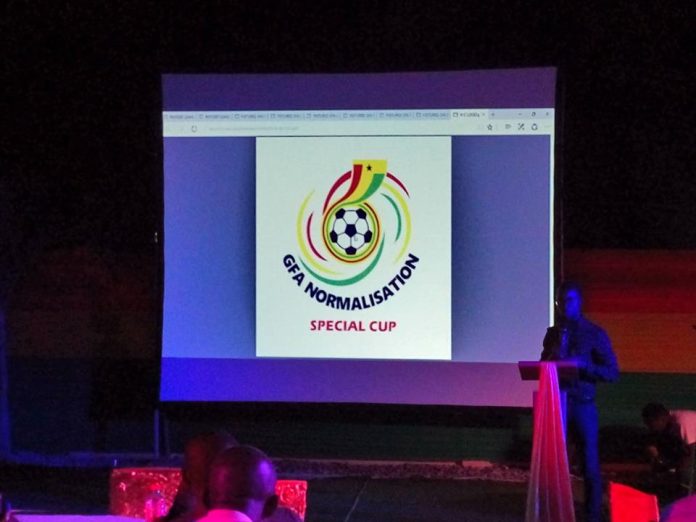 The eventual winner of tier one of the Normalization Committee Special Competition will receive a cash prize of GHC300,000 whilst the runner up will get GHC100,000.

This was revealed by the President of the committee at a ceremony to unveil the new competition.

Giving the breakdown of the financial package for the competition, Kofi Amoah stated that the winner of tier two which is made up of Division One clubs will get GHC150,000 with runner up pocketing GHC80,000.

He mentioned each of the participating clubs will get GHC30,000 as a participation fee.

Dr Kofi Amoah further lauded the government for taking up the cost of the committee’s special football competition which is set to start this weekend.

Dr. Amoah, however, expressed gratitude to the government for its unwavering support to the committee since it was established about six months ago.

He noted that “The NC intended to start the competition where participating clubs will be adequately resourced with players highly incentivized to give off their best. We put in strenuous effort to woo corporate Ghana but it was not easy for obvious reasons”.

“Each of the 64 premier and division one clubs will get GHC30,000 as a participation fee. The winner of the Special Tier One league will take home GHC200,000 in addition to representing Ghana in the next season’s CAF Champions League competition”.

The launch of the Normalization Committee Special Committee marks the return of domestic football after almost nine months of inactivity following the Anas Number12 expose that exposed deep-rooted corruption in the country’s football.

Clubs have been group into Southern and Northern sectors and will begin the battle for the GHC30k prize this weekend.

RUMOUR: Fatawu Issahaku joins Dreams FC in what is seen as a ‘hijacked’ move...