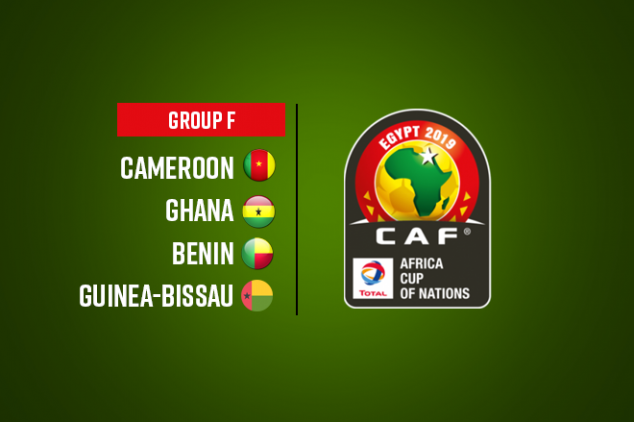 With Group F games of the ongoing African Cup of Nations (AFCON) kicking off on Tuesday June 25, at Ismailia in Egypt, we take a look at a Group that has defending champions Cameroon and four-time winners Ghana, take on Guinea-Bissau and Benin respectively, who would be gunning for their first ever AFCON triumphant.

The Indomitable Lions as the Cameroonian national team is popularly known, head into this year’s edition as the defending champions, having won on five occasions ahead of Group F rivals Ghana, who have won on four editions.

The Indomitable Lions, take on Guinea- Bissau in a Group F opener in a game that promises to be more of physical works as both sides play with so much energy in their previous games.

Having beaten the “The Wild Dogs” of Guinea-Bissau on all three outings of both teams meeting, the Cameroonians would have to go the extra mile to ease pass their opponents, with a new coach Clarence Seedorf, who doesn’t know so much of the African terrain.

Being at the helm of affairs from August 2018, Clarence Seedorf would need more than experience from his enviable playing career to help the course of a Cameroonian side that were crowned winners the 1984, 1988, 2000, 2002 and 2017 editions.

Having helped guide the post for Ajax on their heroics in the just ended UEFA Champions League semi-final, goalkeeper André Onana could be the man to watch for Cameroon.

Onana, 23, is considered the long-term replacement to Carlos Kameni, who has earned the applause of many pundits as a solid shot stopper with so much calmness in organizing his back line.

This tournament presents a fine opportunity for him to prove his worth as one of the finest goalkeepers on the continent as the lions want to roar in reclaiming the AFCON crown.

Guinea-Bissau nicknamed Djurtus to mean “The Wild Dogs” exited the 2017 edition in the group stages but head into this game with hopes high, having finished strongly in the qualifiers to the 32nd biennial edition.

They head into this game as the underdogs, having lost on all three games against the Indomitable Lions of Cameroon but, with so much uncertainties in football, “The Wild Dogs” are desperate to make it out of the group stages in search of their major and maiden silverware in Africa.

Being led by a former national team player, who is having a second stint in the team, Cande was in charge of the team from 2003 to 2010.

Candé who enjoyed a career Portugal returned to his homeland returned in March 2016, and guided his nation to a first AFCON appearance in 2017.

Being the only Guinea-Bissau player to score at the continental showpiece, Juary Soares brings to his fold worth of experience whilst playing abroad.

A versatile defender, with so much power, energy and skill at the heart of defense, the 27 year old would hugely be relied on to organize the backline in set-pieces to avert any danger if their hopes of making it out of the group stages and possibly win the 2019 AFCON scheduled for Egypt from June 21 to July 19 is anything to go by.

AFCON U20 Final Preview: Ghana v Uganda – The winner takes it all in Nouakchott