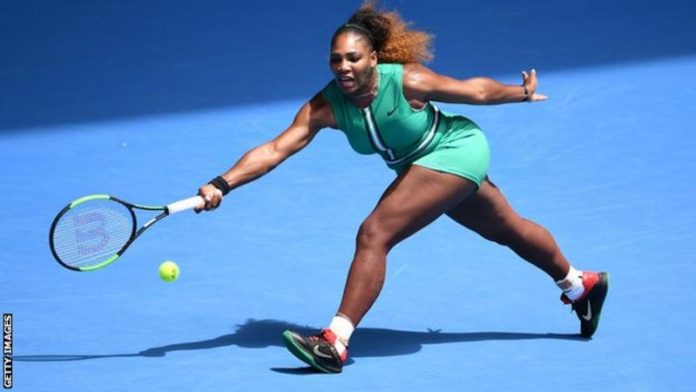 Serena Williams stormed into the Australian Open second round as she began her bid for a 24th Grand Slam title with a win over Tatjana Maria.

The 37-year-old American, whose 23rd major title came in Melbourne when she was pregnant two years ago, won 6-0 6-2 in 49 minutes on Rod Laver Arena.

Williams holds the most Open Era singles titles, but is looking to equal Margaret Court’s all-time record of 24.

The Romanian 26th seed served for the match at 5-3 in the second set but Venus broke to love.

The 38-year-old American, ranked 36th, went on to take the set before dominating the third.

The seven-time Grand Slam champion said: “It was pretty hairy there. I hope that this tough match will prepare me for the rest of the tournament.

Serena, the 16th seed, took the first set in 18 minutes against Germany’s Maria and fired 22 winners during her opening match.

It was her first Grand Slam match since her rant against the umpire at last year’s US Open final.

Asked if she had discussed coaching signals with Patrick Mouratoglou after the warning from umpire Carlos Ramos that sparked the furore in New York, Williams said: “I literally have no comment.”

The seven-time Australian Open winner, who will face Canada’s Eugenie Bouchard next, wore compression stockings and said she was “definitely still concerned” about the dangers of deep vein thrombosis.

“I have had some issues and they’re not done,” said Williams, who experienced potentially life-threatening blood clots after giving birth to daughter Alexis Olympia.

“It’s just something I have to do for pretty much probably the rest of my career, we’ll see. But I’m always at the doctor.

“With DVTs, it’s very scary. I know a lot of people – they’re very common – have them. Especially for me, it’s incredibly frightening.

“I lay on the side of precaution as opposed to not.”

UCL Draw in Full: Chelsea to face Porto, Bayern Munich vs PSG in the the quarter-finals of the Champions League

Ghana Premier League to be expanded from 16 to18 teams