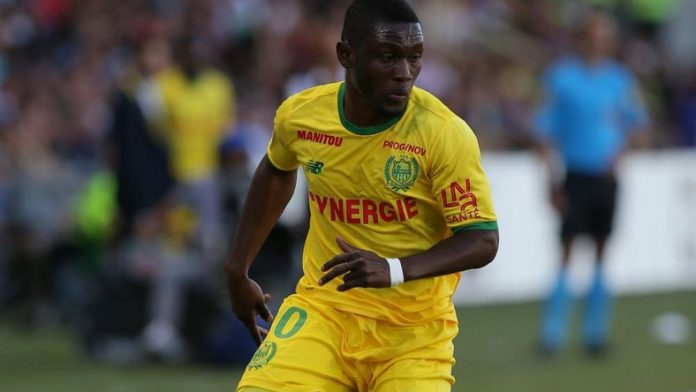 Ghana duo of Majeed Waris and Enoch Kwateng were in action on Tuesday night as their Nantes team booked their place in the Coupe de France quarter-finals, sparking touching tributes to tragically disappeared striker Emiliano Sala.

Kwateng played the entire game while Waris came on as a substitute in the 71st minute in the 2-0 triumph over visiting Toulouse with thoughts of Sala still ringing around the Stade de la Beaujoire.

In-form forward Kalifa Coulibaly, who scored the winner in Saturday 1-0 last 32 win away to Entente SSG, was at it again, opening the scoring with a header from Lima’s inch-perfect free-kick (9′).

Anthony Limbombe added a superb second just before the break, jinking his way through the defence before beating Mauro Goicoechea hands down (41′).

The Uruguayan ‘keeper did a good job of stopping the scoring there, making some superb saves in the second half, but his attacking colleagues couldn’t find a way to hit back and keep Toulouse in the competition.

NANTES’ fans were overwhelmed with the poignancy of their NINTH minute opening goal against Toulouse – in another emotional tribute to former No9 Emiliano Sala.

The tragic striker’s former club treated Kalifa Colulibaly’s strike in the 2-0 victory over Toulouse as a sign amid the continuing search for Sala’s body — with an emotional tweet.

Above a large image of Sala amid a darkened stadium, Nantes said: “Obviously the score at the ninth minute, obviously.”

A body has been seen in the wreckage of the the Piper Malibu plane on the seabed off Guernsey.

And as rescue teams put together a recovery plan for the 67-metre plane, Nantes kept Sala at the front of their minds.

[LISTEN] “Amaju Pinnick and I did not want our countries to be paired for...