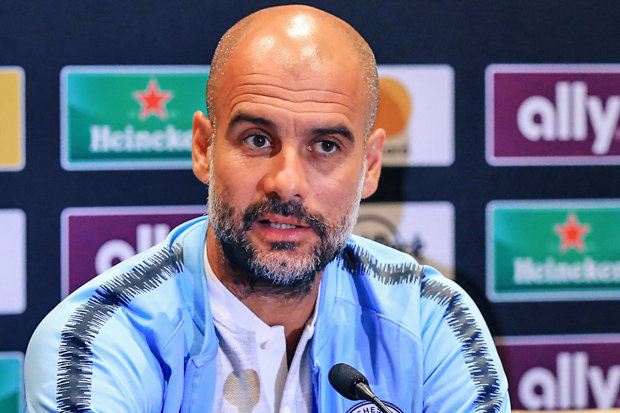 Manchester City boss Pep Guardiola hailed his players after their 2-0 win at Everton.

The result sees Guardiola’s side move ahead of Liverpool at the top of the table on goal difference, albeit having played one game more.

Aymeric Laporte and Gabriel Jesus struck the goals for the visitors.

Guardiola said, “Goodison Park, 0-2, we have to be happy. We had problems in the second half but it was a good game. In terms of consistency, we didn’t concede one shot on target. To score in the last minute of the first half helped us a lot.

“We are not the tallest team in the world so we don’t expect to score from set-pieces but Mikel Arteta works a lot on them. Many decisions could be better, but that is my job to analyse those.

“Gabriel Jesus has scored nine goals in a short time and Sergio got three at the weekend, it is important to have two good strikers. I am so satiusufed, we have a game every three days for three months.

“I don’t know how far we will get, maybe we will die in the road, but we are trying. We have played one more game than Liverpool, it’s good to be top but Liverpool has a game at Old Trafford.

“I don’t think too much about that but four or five days ago we could have been seven points behind, it is a lesson to never give up.

“We have an incredible test on Sunday against Chelsea.”

Gary Neville: ‘I don’t think Manchester United are going to win the league’

GIBA coordinator for the 5 Northern regions and NRFA vice chair donates to media...