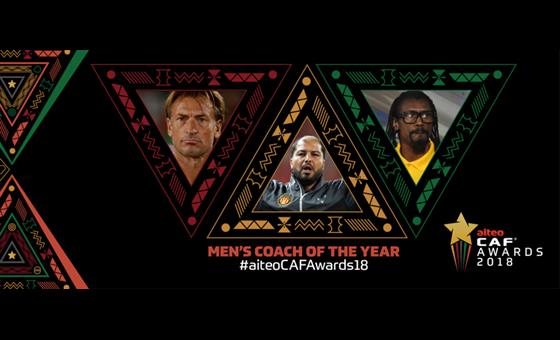 Three technical brains, who left their footprints on African football throughout the year 2018, started on an equal footing, are in the race for the Coach of the Year 2018

Captain of the Senegalese golden generation of 2002, Aliou Cisse was appointed coach of the Senegal national team in March 2015, after a disappointing performance by the Teranga Lions at the Africa Cup of Nations earlier in Equatorial Guinea. He was handed a huge responsibility; qualify for the 2017 AFCON and also the FIFA World Cup.

He forced his critics to eat humble pie with a superb record in the 2017 AFCON qualifiers, with victories in all six matches, a feat unprecedented in the annals of Senegalese football.

With respect to the FIFA World Cup, the Teranga Lions booked their ticket on the penultimate day of the qualifiers against South Africa. During the 2018 World Cup, he won his first match against Poland, as he did 16 years ago against France as a player.

Unfortunately, Senegal failed to progress past the group stage, missing out to Japan via fair play, a bitter pill for Cisse who experienced the same stage with Senegal in 2002.

Few months later, he turned the page and guided Senegal to qualify for the 2019 AFCON with a game to spare.

The Lion-hearted coach, who has twice taken Senegal to the top spot in the FIFA rankings on the continental level, has enough arguments to lift the trophy of best coach of the year among his people, on the 8th of January in Dakar.

A winner of the two Africa Cup of Nations with two different teams; Zambia in 2012 and Cote d’Ivoire in 2015, the first coach to achieve such a feat, Frenchman Hervé Renard perfectly illustrates the expression “a prophet is not recognized in his homeland”.

After modest career as a player in France, his cut his teeth from the dugout at the helm of relatively unknown clubs in the lower-tiers of French football.

Since his appointment as Zambia coach in 2008, the White Wizard has earned a great reputation on the African continent after spells with Angola, Cote d’Ivoire and currently Morocco, a position he has held since 2016.

A native of Aix-les-Bains, he has metamorphosed into a familiar and emblematic figure on the African football landscape. His teams have always been considered favourites at major tournaments especially the AFCON.

Moreover, to corroborate this deep immersion amongst the elite coaches, he was twice named CAF Coach of the Year; 2012 and 2015.

As coach of Morocco, his team bowed out at the FIFA World Cup Russia 2018 on a high despite failing to go past the first hurdle in a group that included Spain, Portugal and Iran.

Paul Merson on Pogba: Go and play snooker if you want it to be about you

‘There is always pressure playing for the national team’ – Dede Ayew